It took approximately 8 hours (give or take) to make the rotating meal plan. Sounds like a lot of work doesn’t it? But it has been *so very worth it*. We finished round 1 and this past weekend marked the end of week 1 of round 2. We haven’t followed it *exactly* and I know that this coming week we won’t follow it exactly either. I haven’t had to spend time *thinking* about what to make for dinner. I just have to go over to the binder, open it up and look to see what’s on the menu for this week. By making it 6 weeks long, I hope to be able to take advantage of buying in bulk and buying only on sale and in the long run saving money. I can also do bulk cooking and make life even easier but I think that is a topic for another day.

So here’s what I did step by step to create a six week rotating menu dinner menu plan of meals my family would actually eat.

Step 1: I asked honeybear to help. We gathered the children together and he stood at the white board. Honeybear divided the white board into sections labeled: Beef, Chicken, Bean, Soup and Misc. Then we brainstormed as a family, while Daddy wrote our choices. I vetoed anything that they came up with that “sounded good” but that was not “tried and true”. I wasn’t about to put *new* recipes on a rotating meal plan just because they sounded good. Once we had several choices for section I typed them up into word documents so that I would have them if I wanted to swap things around at some point.

Step 2: Decide on a theme for each day. Some theme ideas I had heard before “leftovers”, “fun night”, “cook’s choice” “kid’s choice” or perhaps “breakfast for dinner”. Another option is to assign by “main protein”: beef, chicken, bean, vegetarian, fish. Some that we have done in the past include “Taco Tuesday”, “Tortilla”. Taco Tuesday wasn’t just tacos but I liked the name. And the Tortilla night was more of a wrap as it was summer. We’d grill some meat and veggies and wrap it in a tortilla. We decided to blend an “ethnic” theme into our rotating menu plan. We love Asian style food and Tex-Mex/Mexican has really grown on my children. We eat Pizza every week. We want to eat a bean or vegetarian meal each week and we want to eat soup one night a week.

We went with these for our “themes”

We decided that we would like to have a “cook’s choice” once a week and have that rotate between the different themes. This would allow us to try new recipes and give my daughters a chance to experiment in the kitchen.

Step Three: Picking out the meals to fit the theme. Taking the meals from the earlier brainstorming I wrote them on the board by theme. We wanted to have at least one bean meal a week but we decided to have it float between themes. So for Italian night, I put all the dishes that seemed to fit in that category. We then voted for our favorites. The rules were that you had to vote for at least one bean dish.We only needed 5 meals because Cook’s Choice would be the 6th. We did this for each category except Pizza and Leftovers. We did end up with ONE week that does not have a cook’s choice.

Step Four: This was the *hardest* step. It involved solving a puzzle. I wrote each meal on a color coded index card. (Yellow is Italian). I did NOT create index cards for Pizza Night, Leftovers or Cook’s Choice. I used White Blank Cards as “place holders”. I used the index cards to create grid. Instead of trying to type it into the computer and keep deleting or cutting and pasting and instead of using a pencil and erasing, I could move and rearrange each card until I had them arranged to my satisfaction. The white blank cards helped to keep the grid shape. I used a blank calendar page and wrote the final deal in pen. I put the paper in a sheet protector and put in a binder. I’ll talk about this binder in separate post. 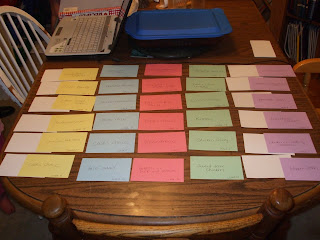 The above is a picture of the color coded index cards. Once I knew where they went, I wrote the week number in the lower right corner. On the back, I put possible side dishes and notes and grocery list for that meal.
Binders Meal Planning