Just where have I been?

Last week a couple of my blogging friends posted a really neat map showing all the places they had visited.

I’m a little late but I decided to join them.  I didn’t do Canada as I’ve  only been to one province and  I’ve only been to one place in Mexico.  I’m so geographically challenged that I wouldn’t even be able to tell you which Mexican state it was so I avoided the Mexico map as well.

I have a goal of at least stepping foot in all 50 states.  When Honeybear was still active duty and we were still moving around all over the place, I had a better chance of achieving that goal but I think I’ve done fairly well so far.  You can clearly see by the white colored areas what I have missed.

There are two states that I haven’t really truly visited but I have actually stepped foot in them!  In fact I made it a point to put my feet on the ground so I could say I had been there. I  (Yup, I told my Honeybear to pull over to the side of the road so I could get out of the car and add that state to my growing list) I did not color in any states that only had airport visits.  I left Delaware white because I can’t remember that far back (it was over 30 years ago!) to the trip I took to D.C.  I *know* I was in Maryland on that trip but Delaware? I don’t know. So when I doubt, I leave it out. <grin>

We’re hoping to get to Texas to visit Honeybear’s parents and I’d love to do a cruise to Alaska.  I’d also love to go visit a good friend in Colorado and if I were able to do that I think I’d be able to get a few more states covered.

So here is my map: 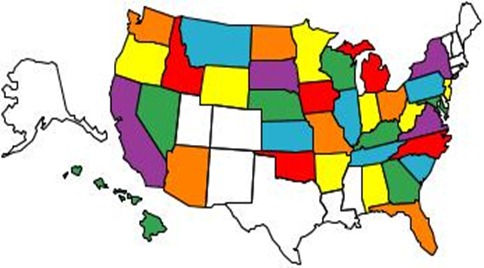 To get your own map click here.  If you do post about where you’ve been leave a link in my comments so I can check it out!

Note: For Debra’s sake and my own sanity.. I had to fix it.  Province not Providence LOL