In honor of Mrs. White’s Christian Home blogzine, and because I just made this soup this weekend for church,  I’m going to share again this soup that I originally titled “Soup Experiment”

This soup is hearty, filling, satisfying and perfect to serve to guests.  My family loves the soup and from the empty pot on Friday night, my church friends appeared to enjoy it as well.

The soup is gluten free, dairy free and soy free.  I have struggled with what to serve my beloved friends with food restrictions.  It isn’t easy to think of menus when I don’t live with those allergies or sensitivities but I do not want that to stop me from practicing the art of hospitality. (I have enough other excuses that I must work through!)

I did make one change from my original recipe.  Instead of using Oregon Spice Vegetable Broth Powder and water I used homemade veggie broth and then added enough water to cover potatoes.  I had veggies that needed to be used up or thrown away and were past the “serve crisp with a dip” stage!

Here is my original recipe but with notes:

* I used my Slap Chopper to “dice” up the carrots and celery as I wanted smaller pieces than my usual soup slices.

I sauted (I don’t know how to manipulate my keyboard to make that look right!) the veggies except the potatoes in some oil in the big soup pot until the veggies were limp.  I removed them from the pot and added the potatoes, veggie broth powder and Seasoned Salt.  I added enough water to cover the potatoes by about 1 1/2 to 2 inches.  For a thicker soup, I’d use water to just barely cover the potatoes.  You can always add more if you need it. I brought the potatoes to a boil and then turned it down to less than a boil but slightly more than simmer (I told you I am not precise LOL… I cook by feel, smell, taste and sometimes touch!)

When the potatoes were just starting to think about becoming soft (the point where you could poke a fork in them but they were still too hard), I added the other veggies and simmered until they were all nice and tender.  Be careful with potatoes.  Though for my more traditional potato soup I cook them until they are falling apart, I want these chunks for this soup to hold their shape.

I put several cups (3 maybe?) of soup into my Vitamix and blended it all up to make the “creamy” part of the soup.  Stirred that into the soup and added salt to taste.   It wasn’t quite as thick as I wanted but it had a creaminess that was quite filling and satisfying. 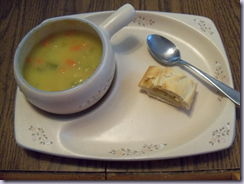 This post has been submitted to the Christian Home Blog Magazine hosted by The Legacy of Home.  It appears in  Issue 9.    This recipe has also been linked to Tasty Tuesday hosted by a glimpse of our life.