It Can’t Be Done

My family has been on a Stargate kick here lately.  We’ve been watching 1 to 2 episodes most nights for some time now.  I don’t remember what season we are on now.  It could be season 8, but I want to say season 9. My daughter just informed me that we are indeed in season 8. In last night’s episode, “Avatar”, Teal’c, is trapped inside a virtual simulation game. The game is in learning mode and creating the game based on Teal’c’s thoughts and wishes.

Teal’c wants the game to be harder.  He wants it to be more realistic. The game adapts and becomes more realistic.  The fail safe fails because in reality Teal’c would never give up so the game won’t allow him to “give up” or quit.  Deep down, almost secretly, Teal’c also believes that the Goa’uld can’t be beat. Since the point of the game is  to defeat the invasion of the Stargate base and since ultimately the Goa’uld can’t be beat, the game cannot be won. Teal’c becomes discouraged.  He can’t quit and he can’t win.

The rest of the Stargate team figures out what’s happening, hooks up another game chair and sends Dr. Daniel Jackson to help Teal’c.  With Daniel and Teal’c working together as a team they are able to defeat the Goa’uld and win the game.

As I watched the episode I could clearly see in myself how I have been affected by the attitude of “it can’t be done.”.  For me it is spiritual.  It is the essence of my lifelong search for God’s Truth.

Growing up I believed that in order to go to Heaven, God must love me.  I thought that I had to *earn* God’s love.  I knew it could not be done.  I was never going to be good enough for God to love me.

I confused the concept of good works that we do because we love God with the idea that I had to do good works to be good enough for God to love me.  Then I came into contact with Protestants who also could not see what my problem was and confused the issue further by telling me that I was trying to earn or work for my salvation.

It wasn’t until recently, when I realized the distinct difference between striving to earn God’s love and working to earn salvation.  I was unable to grasp the reality of God’s love.  Even though I was always told over and over again, and even though I could read of God’s love in the Bible, I just didn’t really believe that God is Love.   That is, I didn’t believe, until I discovered Orthodoxy.

Through the ancient faith of the Orthodox, I have come to see God as the God of Love.  I no longer strive to earn his love.  I am assured that He loves me.  The Truths that Paul writes in his New Testament Epistles ring true in my heart for the first time.

I am no longer motivated by fear.  Fear that God will punish me or fear that I won’t be good enough.  I am motivated by love.  I know that I am going to fall short but I’m no longer striving to make up for that shortness.

St. Paul talks about God’s love through his epistles but I was quite certain that Christ was not the same Christ whose demands I could never meet.  “Be ye perfect even as I am”.    “Take up your Cross and follow Me”.   I did glimpse a bit of Paul’s Christ in the Gospel of St. John but for years I lived with the attitude of it can’t be done.  I can’t meet Christ’s demands, therefore God can’t love me therefore I am a lousy Christian.

The Orthodox Church is my Dr. Daniel Jackson.  The Orthodox Church has joined me in my “game” and helped me to defeat the fear of failing God and to learn to live and walk in His unfailing Love.  What I thought couldn’t be done, is already finished.

For I am persuaded that neither death nor life, nor angels nor principalities nor powers, nor things present nor things to come , nor height nor depth, nor any other created thing shall be able to separate us from the love of God which is in Christ Jesus our Lord (Rom 8:38-39) 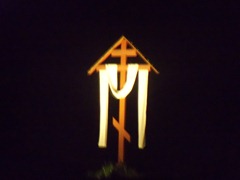