I love my cat.  Really I do.  I love both of them.   I just don’t love the fat cat at 3:30 in the morning. We have two cats.  They are littermates.   We adopted them as kittens when they were 3 months old and we’ve had them for nearly nine years.

These are not the first cats that I’ve had, nor are they the cats I’ve had the longest.  Boots, my childhood companion, lived to a very old age of 20. My family adopted him when we was two and he lived in parent’s house for 18 years.  George and Lacy, like Boots and every other cat I’ve come to know, have their own personality.  Their own little quirks that both endear them to our hearts and frustrate me to no end.

Most cats do not like books.  Books, you see, steal the attention of the human and the cat, who only wants the attention of the human when the human is otherwise engaged, must do whatever he (or she) can do to interrupt the reading human.  Lacy is no exception to this cat book rule.  She will not put up with your reading a book.  She will jump into your lap and pester you to pet her.  She will consent to allow you to read silently if you pet her at the same time and you mange to keep the book out from under her body.

George, however, is the exception to the cat book rule.  He likes books.  He likes to be read to.  In the afternoons, when I pull out a book to read aloud to the girls, you can be reasonably sure that George will make an appearance.  He won’t try to distract the reader but he will find someone’s lap and attempt to take over all available space.  So while one cat fights to stop the reading, another cat settles in to do some listening.   George also comes to visit in the evenings when Honeybear reads aloud.  I’ve also found him curled up in the lap of Tailborbear while she reads aloud to him (and only to him!)

Let’s go back to the not loving the fat cat at 3:30 in the morning bit.  On more than one occasion I have been awakened by a furry head butt to my chin followed by a rough wet tongue licking my cheek.  Why does this cat insist on getting attention in the middle of the night?  He’s not content though to just shove his head into my chin or lick my cheek (yuck!) but he lays on me!  He’s huge and he sits on me!  <sigh>  I really don’t mind him laying on my feet at night.  I kind of like the heater aspect when my feet are cold but stay off my shoulder, arm and chest thankyouverymuch! 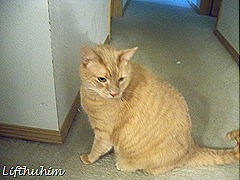