A little wildlife… a little close to home

So today is Saturday.  But not just any Saturday.  Today is Bountiful Baskets Saturday.  New shipping routes/company means new pick up times and a (new to us) location.

So at oh dark thirty Honeybear and I roll out of bed, throw on some clothes and plan to exit house to pick up produce.   He opens the door.  We both go.. Aaaahhh!  And he slams the door closed.  We peek out the peep hole and decide those are NOT moths attracted to the front porch light.  I am sure they are some type of stinging insect but the behavior seems unusual.  The sun has not risen but they are active!

We exit through a different route and pick up my baskets of produce. (I “contributed” for 2 conventional baskets and 1 Asian pack.  Lots of veggies and some fruit.  Good stuff.)  After we returned home and entered  through alternate route, Honeybear investigated.

The porch light was off and the creatures had settled down ON the light globe.  It was still early enough that they were not real active so Honeybear, armed with spray, decided to kill the ones on the porch.

Ewww!  Yuck!!!  Creepy!  I was going to post a picture of the carnage but well I couldn’t handle looking at dead “bee” bodies.   Ewww!

Later in the afternoon though,  Turtlegirl and Honeybear made a much more pleasant discovery.  They were doing some yard work and when Turtlegirl went to start weeding she noticed 3 baby bunnies scurrying away.   They “hid” in the area near the front porch. 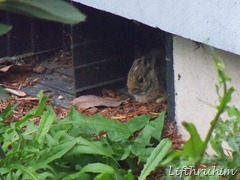 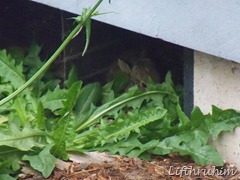 See the weeds?  The weeds need to go but we decided that it would be better to leave the weeds and not frighten the poor babies.  The baby bunny in this third picture is very hard to see.  It’s cowering in the corner. 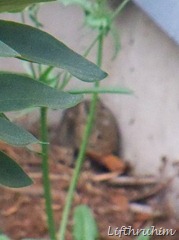 I expect wildlife in my back yard.  We have a forest back there (really! There’s just a chainlink fence between our back yard and a forest). We’ve had squirrels (both gray and little black ones), rabbits, possum, raccoons, honeybees, and lots and lots of birds that have lived or visited us in the back but now we have nasty stinging things and cute little baby rabbits in the front.    At least the baby bunnies are adorable!