A is for Apples!

A friend of mine is starting a new meme this week called Blogging through the Alphabet. I make no promises or guarantees that I will post every week but this looks like a lot of fun so I wanted to make sure I jumped in this week.

But A? I knew my friend Debra from Footprints in the Butter was going to use Ancients for her topic so I put that idea aside.  I pondered and polled my children.  “Annihilation,” a sleepy 16 year old stammered. (She was still in bed.  I woke her up. Oh not to get an idea.  Just it was time to get up and since I was there already I had to ask!). Annihilation? Nope that didn’t work for me.  Too negative for a first post about blogging through the alphabet.

Lent is just around the corner (For Orthodox Christians Lent begins on Monday, though I know it has already begun for my Western friends.) Almsgiving! That’s an A word and it has to do with Lent! Almsgiving? That’s a pretty serious topic for a for a first post.  I put that idea aside as well.

While looking through the refrigerator (I forget why because I’m getting ancient.. see Debra, I could have used that topic too! )I spotted some fruit!  That’s it!  Apples.  A is for Apples!

I learned two things about apples: green was sour and red was supposed to be sweet.  I also learned, I didn’t like apples. Or at least I didn’t then. I liked applesauce and I liked apple crisp and apple flavored things but I did not like eating an apple.

Over the years, I discovered that it’s not APPLES I dislike. It’s Red Delicious apples I can’t stand.  I’ve learned that there are so many more varieties of apples.  Good ones! Not mealy yucky ones. Around here we most often eat Fuji or Gala apples but I really adore Honeycrisp and my new favorite apple is the Junami. I was recently introduced to this extremely juicy, delicious apple through the Bountiful Baskets Co-Op. 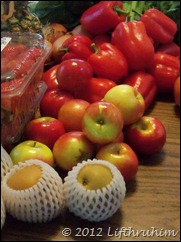 Here you can see my Junami apples along with some strawberries, Asian pears and red bell peppers. (I love Bountiful Baskets!) We still have a couple of Junami apples left.  This past Saturday though we got some Braeburn apples. Did you know they were discovered in 1952 in New Zealand?  I didn’t.  I do now but that’s cause I had to search to make sure I spelled it correctly because spell check keeps saying it is wrong.  Braeburns make excellent cooking and baking apples.

Go check out Marcy’s post over at Ben and Me, you’ll find another A is for Apples post and A is for Amazon etc.  You can also link up your own Blogging Through the Alphabet post!