Yes, I have girls.

If you regularly read my blog you already know that I have four daughters.  My oldest BooBear is 16.  At least for another nearly 7 weeks.  My twins are Supergirl and Turtlegirl.  They’re 14 (and a 1/2 mom.. don’t forget the half!).  Tailorbear is my chronological youngest.  She recently turned 13 this past March.

Supergirl is NOT your typical 14 year old by any stretch of the imagination.  She’s a miracle and life through her eyes has taught me much.  I even have a much neglected blog where, in theory, my husband and I share the lessons she has taught us.

Supergirl may not be developmentally a teen but she is still a girl and she so wants to do things “like my sisters.”  So even she got in on the girly hair thing.

Girly hair thing?  Yup.  I said I had girls.  Yesterday my oldest discovered a new hairstyle (or at least new to us!) called the Dutch Braid.   Last evening the four girls gathered around a computer and watched clips and read about different braids.

Of COURSE they had to try them out!  But it wasn’t enough to try different braid styles last night.  They had to do them again this morning.

Here’s some pictures of their fun:

We’ll start with Supergirl.  The picture is from this morning.  The braid is from last night.  She would NOT let her sisters re-do it.  So it has a “messy” look. Her hair is so fine I’m really surprised the braid has held up so well since she slept in it. This is the Dutch braid using a form of lace braid.  I’m told that it is now being called the Katniss braid because of the Hunger Games movie (which  we’ve not seen.) 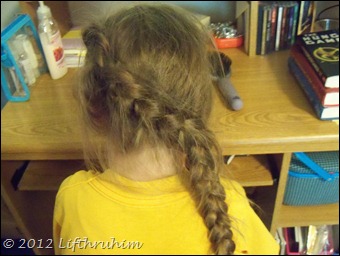 Her twin, Turtlegirl, has shorter, layered hair.  This makes it really difficult to braid but of course since ALL the sisters were doing braids, she also had to participate.  She says that the “Dutch braid” is holding all the hair in way better than any of the “French braids” she’s done. 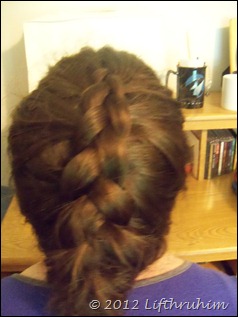 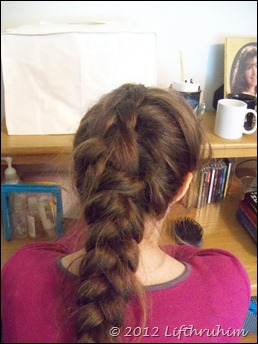 And last but certainly not least, my oldest, the hair master.  She saw the Dutch braid and she saw the lace technique and she was intrigued.  She’s read the Hunger Games (all three books as have two of her sisters) and she *wants* to see the movie but she insists that she liked the braid for the braid.  She displays the “Dutch Braid” in lace style aka “the Katniss braid” (Oh look there’s me in the picture again and look there’s the Hunger Games books!) 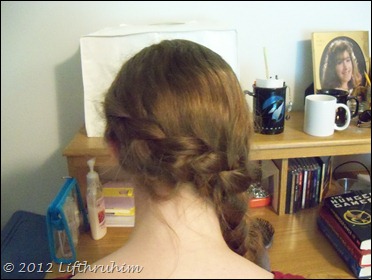 Life is never dull with four daughters.  I’m just grateful I have my own bathroom.