Yes, I know that it is supposed to be Think Back Thursday and I know today is Wednesday but thankfully Debbie over at Debbie’s Digest keeps her link open for a week.  (Thank you, Debbie).

This week’s theme is Animals.   I went through some old pictures that I have on a CD (Back in the days when we still developed film but you could also get a CD with all the pictures on them) and found a few that I wanted share.

This first one is from our first MAJOR vacation as a family.  We drove to Minnesota for a wedding and on the way we stopped in this tourist trap place in North Dakota.  We arrived after 10pm and were desperate for a hotel room.  We spent a bit of the morning looking around before hopping back in the van and continuing on to my sister’s house in Minnesota.   I know this is a statue but it’s an ANIMAL <grin>  This was June of 2004.  BooBear turned 9 on this trip.  The twins (Supergirl and Turtlegirl) were 6 1/2 and the “baby”, Tailorbear was 5.  Turtlegirl and Tailorbear were often mistaken as the twins. 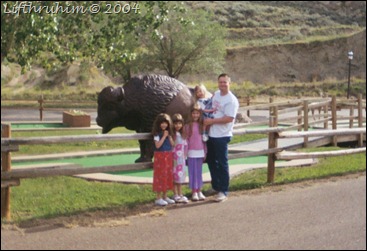 The following picture was taken by my husband.  I think it is in Saudi Arabia but I don’t know for sure.  He took this while he was deployed to the Middle East.  And we thought we had problems with deer blocking the road! 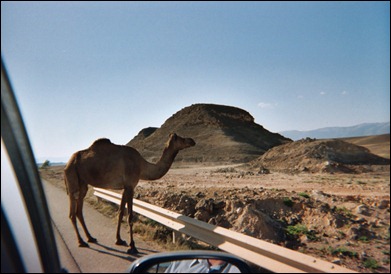 I was so thrilled to find this picture of our beloved cat Daisy!  We adopted her when we lived in NJ.  She moved with us to Missouri and then made the trip out west with us.  I don’t know exactly when this picture was taken.  It had to be after March 2001 (when we moved into the house) and before Mid July 2002 because that’s when we lost her.  She had feline leukemia.  The adorable little girl with all the curly hair?  That’s my Turtlegirl.  She would have turned 4 in late summer 2001.  I am thinking this picture is from summer of 2001. 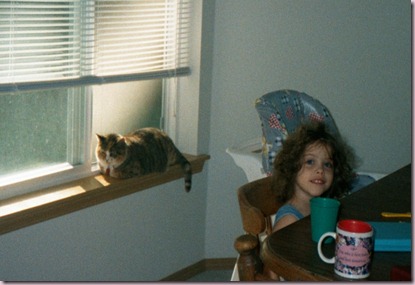 After Honeybear came back from the Middle East we took a trip to the Ocean.  You can not see the Pacific Ocean in this picture but I assure you it is there.  One morning we were greeted with deer on the lawn.  Here BooBear watches the deer.  It was just a mini-vacation over a long weekend but it was great for re-bonding with Daddy after he had been deployed for nearly a year.  (This would have been sometime in June, I think, of 2003.  BooBear would have been turning 8. 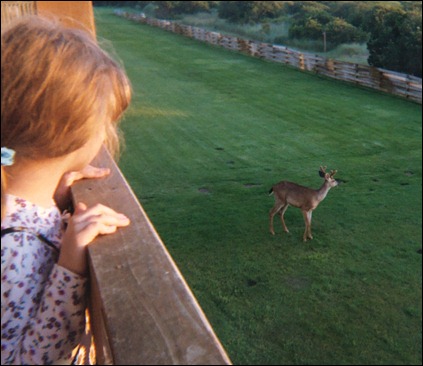 Think Back Thursday is hosted by Debbie over at Debbie’s Digest.  The June 7th theme is Animals.  The next theme (June 14th) will be Outdoor Game(s).