I used to think that I wasn’t much of a fan of fantasy.  Books such as The Orphan King by Sigmund Brouwer have made me decide that I do like this genre after all. I love the medieval time period.  Knights, quests, monks and mystery.  That’s my kind of book. 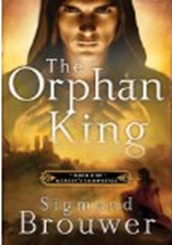 The future of the Immortals is in the hands of an orphan
My greatest fear was that they would find us and make of us a sacrifice beneath a full moon. Now you, Thomas, must help us destroy the circle of evil.

The last words of a dying woman would change the life of young Thomas. Raised behind monastery walls, he knows nothing of his mysterious past or imminent destiny. But now, in the heart of medieval England, a darkness threatens to strangle truth. An ancient order tightens their ghostly grip on power, creating fear and exiling those who would oppose them. Thomas is determined fulfill his calling and bring light into the mysterious world of the Druids and leaves the monastery on an important quest.

Thomas quickly finds himself in unfamiliar territory, as he must put his faith in unusual companions—a cryptic knight, a child thief, and the beautiful, silent woman whom may not be all she seems.  From the solitary life of an orphan, Thomas now finds himself tangled in the roots of both comradery and suspicion.

Can he trust those who would join his battle…or will his fears force him to go on alone?

From the very first page this book pulls you into another world. A world of secrets and mystery.  A world of knights and monks.  Of friends and enemies. Of magic and knowledge.  Things may not always be what they seem to be.  Who is a friend?  Who is a foe?

Stephen King defines a successful novel as one that “should interrupt the reader’s life, make him or her miss appointments, skip meals, forget to walk the dog.”  In my opinion The Orphan King is a successful novel.  More than successful.  I refused to sleep.  Ignored my family.  COULD.NOT.PUT.IT.DOWN.  I needed to keep reading so that I could figure out the answers to the questions but no sooner would Mr. Brouwer answer one question then another 2 would come up.  Is the knight on the up and up?  Is the girl a spy?  Is she a double agent?  Is she leading on the boy or does she really care for him?  And the child thief?  Is he all that he appears to be?  Does he have any idea what’s going on? Is it a coincidence that he’s traveling with Thomas?

You can read an except from the book and see for yourself, but I warn you that you might get sucked in and have to read the whole book! (Click on the hyperlink and then click on the excerpt tab)

So what didn’t I like about the book?  It’s the first book in a series and the next book won’t be available until February 2013.  I don’t like having to wait that long!

***I received a copy of this book FREE from WaterBrook Multnomah Publishing Group’s Blogging For Books program in exchange for this review.***