The air has turned crisp. Leaves are beginning to change from green to gold, yellow, and red. Yellow school buses visit in the early morning and clog up traffic later in the afternoon. Children have started going back to school.

We don’t necessarily follow a traditional September to June school year but I do usually make some sort of “back to school” type tradition in September that often involves fresh new school supplies and photographs. 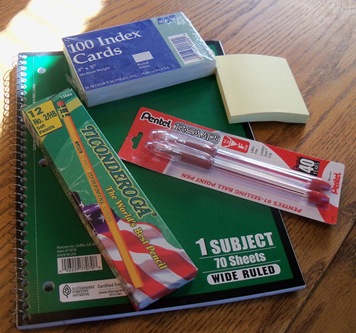 Not this year though.  I mean we did do “senior pictures” for BooBear because <gasp> she is a senior.  But here we are at the END of September and we’ve not really had a “back to school day”  Or a “Not back to school” since we’re home schooling and we don’t “go” away to another place.

It could be that Fall and September just snuck up on me.  But I think it is more than that.  We did take 3 weeks off in July/August for a “summer break” but it didn’t FEEL like a break   Why didn’t it feel like a break?  I can think of a couple of reasons.

We had a very “off” year last year and didn’t finish the work that we had set as a goal.  We set the end of June as the “we want to have the work from the 2011-2012 year completed” goal.   It didn’t happen.  Some of was illness and some of it was Schoolhouse Crew Related.  It’s hard to finish your curriculum when you set it aside to review something else.  That’s a risk you take when you’re part of a review team.  It’s a risk I am more than willing to take, but it does mean an adjustment to goals and a fuzziness to endings and beginnings.

Because we didn’t finish curriculum that we wanted to finish we kept going and did not take a break at the beginning of July.  We slipped, nearly unnoticeably into the next school year but didn’t really start new material (unless of course you count the material we got during the summer from the Review Crew).

In addition to the not finishing material, we also had a new experience with the Review Crew.  In the past the Review Crew would take a break a during the summer.  For 2012 though the Crew transitioned to a calendar year approach.  We’ll get a break from mid-November through December.

So we started some fresh new curriculum thanks to the Crew and we’ve been finishing up some previous work.   We WILL be taking a nice long break during the holidays! 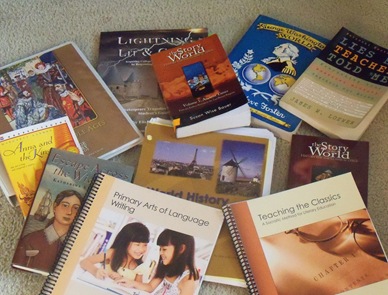 It feels weird to not have a special “back to school” day.  Maybe I'll set that up for Columbus Day since daddy will be home from work.  We can make a point of boxing up the finally finished curriculum and maybe pass out fresh new pencils.  Something.  Anything to mark a transition from old to new and of course to have an excuse to take some pictures.  And then I can blog about what we’re actually using for curriculum.