Secretly, I love the law.  When I first enrolled in community college <mumble mumble> years ago, I was officially a Pre-Law student.  I loved my sociology and criminology classes and I started to research law schools.   My life has gone in a completely different direction but my love for the law, particularly criminal law, is fed through books by authors such as Randy Singer.   I just finished reading The Judge which was previously published under the title The Cross Examination of Oliver Finney.  Like the other Randy Singer books I’ve read, this one is compelling, gripping and full of twists and turns. 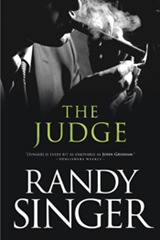 About the Book: (From the Website:) “When a brilliant billionaire is diagnosed with inoperable brain cancer, he realizes that all his considerable wealth cannot prepare him to meet his Maker. But he has an idea that might: he will stage the ultimate reality show. With his true agenda hidden, he auditions followers from all the world’s major religions, inviting them to the trial of their lives on a remote island, where they must defend their beliefs against spiritual challenges.

Oliver Finney, a feisty old judge with his own secrets, is chosen to defend Christianity. As the program takes a strange twist, he quickly realizes he is trapped in a game of deadly agendas that may cost him his life. With Internet access monitored, Finney sends coded messages to his law clerk, Nikki Moreno. Aided by a teen crypto-geek, Nikki soon discovers the key to understanding Finney’s clues in an apologetics book Finney wrote and must race against time to decipher the mysteries contained in the ancient words of Christ before her boss dies defending them.”

Mr. Singer creates characters that are real.  These are not character sketches or stereotypes.  I formed a real attachment to most of the contestants on the island. I appreciated that each defendant was dedicated and sincere in his faith. Mr. Singer could have used this plot device as method to ridiculing non-Christian religions.  I appreciate that he did not. The point is well taken that behind every stereotype are real human beings.

Mr. Singer crafts the story so that you think it’s going in one direction but suddenly it’s done a 180 degree turn, no wait, 90 degree, no a full 360.  At one point I found myself wondering if I has missed something because Judge Finney had put 2 and 2 together.  Did I accidently skip a chapter?  Did I get interrupted while reading the page when he solves the puzzle and I missed it?  Nope.  I just needed to be patient and trust that Mr. Singer will explain it all.

As part of this blog tour I’ve been asked to answer this question: “How would you defend your faith?”   My first off the cuff answer is “not very well.”  When I step back to examine the question with seriousness,  this verse comes to mind:

“But sanctify the Lord God in your hearts, and always be ready to give a defense to everyone who asks you a reason for the hope that is in you, with meekness and fear.” (1 Peter 3:15)

So I should have a ready answer but I don’t.  I don’t have a defense for the reason that is the hope that is in me.  On the heels of the above verse though comes this one:

My life should reflect a faith that gives evidence of the hope that is in me (Christ in me.) As such my life should give testimony of God’s love.  I think I fail but I want to be like Judge Oliver Finney whose life is a sermon.  Do I live a sermon of loving others as Christ loves me? If I do (which is my goal) than that is my defense.

My favorite line in the book is delivered by the Hindu: “I decided this show wasn’t worth dying for. My faith-now, that’s an entirely different matter.”

If you’ve read any of Randy Singer’s other books such as The Last Plea Bargain, which I reviewed, then you’ll want to read this one as well.  If you like courtroom drama you’ll enjoy this.  If you like to examine faith, be prepared to come away pondering your own.