M is for Music

For many years my girls have been taking piano lessons.  That means that I grew very accustomed to hearing the (digital) piano played frequently throughout the day.  I’ve even found that I would dream about the piano playing or have a piece of music running through my mind.

I don’t always enjoy listening to the scales and technique practice, nor do I find it pleasurable to hear them first begin a new and more difficult piece but love hearing the progress they’ve made over the years and it brings a smile to my face when one of them chooses to try her hand at improvising or composing. 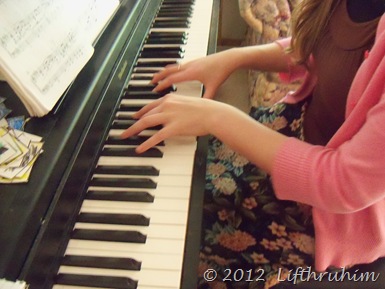 Several weeks ago our believed digital Piano, a Technic, began to die.  First it was one broken  key.  A pain but sort of workable.  Then all the D’s and F flats above middle c only wanted to work part time.  It became a gamble; would they have sound this morning or not.  If that wasn’t bad enough, several more keys decided to be uncooperative.  If you pressed ONE key, you got the sound of a chord.  At this point BooBear gave up practicing songs and the other girls ignored the Technic altogether.

BooBear is the only one of the big three still taking lessons.  Her future is wrapped up in the piano.  She wants to teach piano.  She plans to get a music degree in piano performance and hopes to open her own studio some day.

It is during these last couple of weeks with the house filled with silence that I have come to realize how important music is to my family.  We may not all express this importance in the same way nor with the same style but the loss of the piano wasn’t just a blow to my oldest and her college plans, it left a hole in the heart of the family. It ripped at my soul to not hear daily music.  Yes, I put restrictions on WHEN the piano could be played.  It is rather difficult to conduct a phonics lesson when you have to compete with Chopin or Mozart or Bach or even just scales!

With 2012 being “the year that everything broke”, we just really didn’t have the money to replace that instrument.  We prayed.  And then we prayed some more.   I discovered that there was a warehouse full of used discount pianos.  I felt sure this was the answer!  We made a trip (an hour and a half one way) to look at pianos.  We found one that might work and that would be within our very tiny and tight budget.  I told the salesperson we needed an “emergency” piano.  I explained the situation and that we needed to find something as soon as possible because recital season is beginning and scholarship auditions are right around the corner.   He promised to have the technician look over the piano thoroughly, tune it, and he would work a deal for us.  Give him a week, he said.  12 days later I called him.  He was so sorry but the technician had been so busy and pianos that are actually sold get priority.  He would try and squeeze it in that afternoon and call me in the later afternoon or early evening.

He never called.  Fortunately, we had looked at a Casio digital piano at Costco.  It wasn’t what we were looking for and was a bit more than we wanted to pay but it would be available NOW and we could take the time to save up some money and finally buy a real piano sometime in the future.  When the phone call never came we gave up on the real piano, the “emergency” piano, and the next day (yesterday) we headed to Costco.

The sound quality is excellent, but we don’t really need all the bells and whistles.  It has a stand, 88 weighted keys, and a sustain pedal.  It plays and sounds like a real piano.  But best of all, and most importantly, today has been filled with the sound of music as the girls each took turns to practice again. 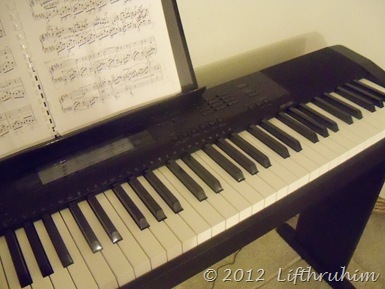 This post is linked up to Marcy’s Blogging Through the Alphabet meme.  This week we’re blogging about the letter M.