I never seem to follow a recipe exactly but instead take a bit of this and little of that and throw it all together.  This week I want to share my variation of Crock Pot Hungarian Goulash.  The original recipe came from the Complete Slow Cooker Cookbook by Carol Hedding and is titled “Hungarian-Style Goulash”  It is described as a stew.   I think of it as more of a saucy dish served over noodles, but Ms. Hedding’s version is more like a broth with chunks of meat and vegetables. If I created her recipe, I would be tempted to put the noodles in the crock pot or to put the noodles in a bowl and ladle the Goulash.

But here is “Tess’s Hungarian-Style Goulash” 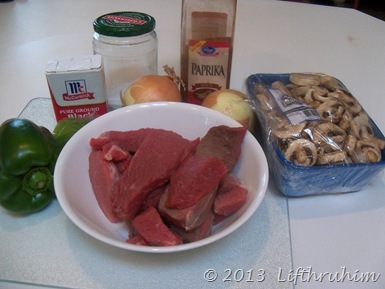 Here you can see most of what you need.  I realized too late that I hadn’t put the tomatoes in the picture.  This was the meat after being trimmed but before I cubed it into bite size pieces.  I only used 2 cups of the mushrooms and the rest of those babies are in the crock pot right now for tonight’s dinner. (Chicken Stroganoff). 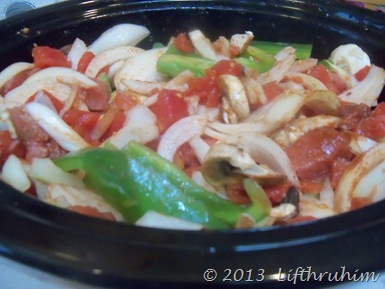 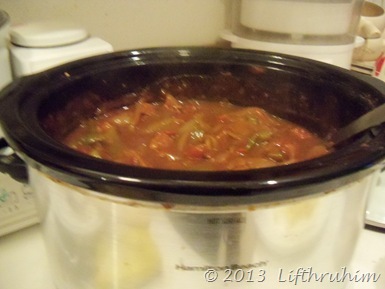 To Serve: Spoon over egg noodles, top with a dollop of sour cream (totally optional!) and serve with a salad.  I also serve it with green beans. 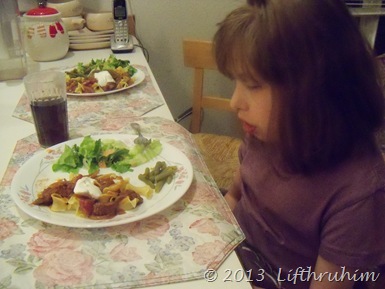 Notes: my version adds the green peppers, more tomatoes, more water, thickening, and sour cream.  I’m thinking of adding carrots next time.  I may even add green beans, too, leave out the thickening and serve it in a bowl with crusty bread and a salad on the side.  This recipe feeds all 6 of us with leftovers that would feed 2-3 people for lunch.  This would easily feed 8 people and no one would go hungry!  One more very important note: you’ll want to make sure your paprika and pepper are not so old that they’ve lost their zip.  I discovered my paprika needs to be replaced.  I used 3 times as much and still didn’t get the flavor I wanted.  So I’m adding Paprika to my grocery list.