P is for Poetry {Blogging through the Alphabet}

In a few days it will be the 100th anniversary of my grandmother’s birth.  She was a writer: a poet.  I remember when I was 10 and she gave me one of those Mead Spiral notebooks.  She told me I should write it in it everyday.  She encouraged me to write poems and short stories.  Many of her poems were stories: memories shared and treasured.

Today I was working on more cleaning and de-cluttering from the Great Bedroom Swap of 2012 and I came across this poem.   It doesn’t have a date but I know it would have been written after September 2003.  I suspect that it was written for my daughter’s 8th birthday, which would have been in 2005.

[Turtlegirl], age 8, is my [great] granddaughter.
She lives so far away
She came to visit me one summer.
In the creek and on 4 wheeler
she climbed the mountain
She liked this way to play

In the first stanza grandma writes from her own perspective and then in the second stanza she switches to my daughter’s perspective.  Yes, I am the mama that went to grandpa and grandma’s house and played in the creek.  My children played in the same creek that I played in and ate fruit from the Pear tree that my great grandfather had planted.  Grandma’s been gone nearly 5 years now and I miss her.  I miss her stories and her letters and her poems.  In those letters and poems a piece of grandma still lives on. 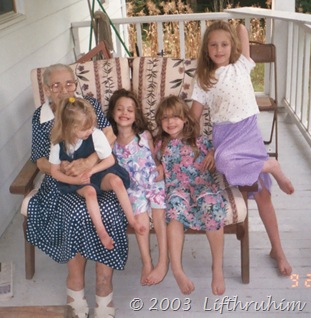 I am so glad that my children were able to have a relationship with my grandmother.  She passed on her love of writing to another generation.

From The Small Book of the Poems of [Turtlegirl]***

To go to, yawn, sleep
is good, yawn, you have
several-everal dreams,
and, yawn, I think
it helps you grow.
Yaaaawwn Good Night!
ZZZZZZZZZZZZZZZZZZZZZ

Come join us over at Ben and Me!  This week is the letter P.

***pieces of notebook paper cut into quarters and stapled together.  Book contains 5 poems written by Turtlegirl around age 9.  She gave the book to ME (her mother) as a gift :D