One of my most favoritest (is that a word? I’m making it a word LOL) crock pot recipes is my Super Easy Crock Pot Roast Beef which makes a Fabulous French Dip.   I had a couple of pork roasts (boneless sirloin tip roasts to be exact) but no beef roasts.  We had already done pulled pork bbq sandwiches and I wanted to do something different. My family suggested we try making french dips but using the pork instead.

It turned out fabulous!  This is a keeper and though I still love my beef dipping sandwiches, this Pork Roast Dip Sandwich will satisfy my dip craving.  And it’s cheaper for me than a beef roast. 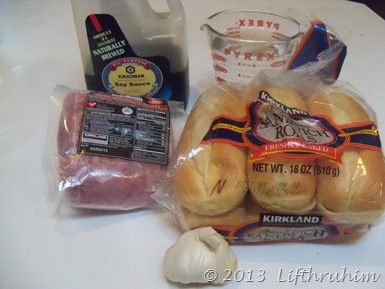 Place meat in slow cooker add soy sauce water and garlic.  Cover and cook on low for 8-10 hours or on high for 4-5 hours.  I usually cook on high because I never get things started early enough.

Part way through cooking I cut the roast in pieces.  Some of the pulled pork recipes I had read had suggested cutting the roast into pieces.  I think it helps when it comes time to shred the meat and the flavor of the au juice infuses into more of the meat. 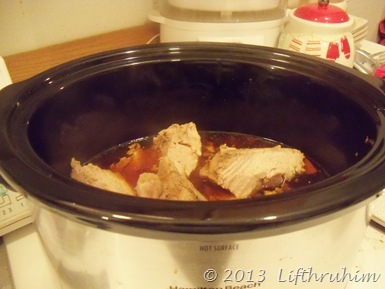 When the meat was nice and tender, it shredded very easily.  I just used two forks to kind of tear it into strips. 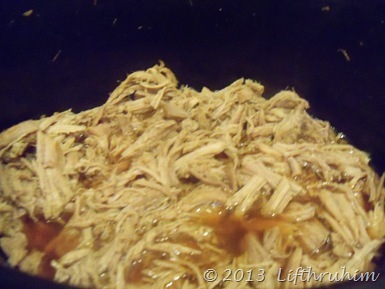 When the meat was all shredded I turned the crock pot to low and let it simmer for a bit while we toasted our sandwich rolls.  Some of us like them toasted and some do not care either way.  So we just toasted them all. 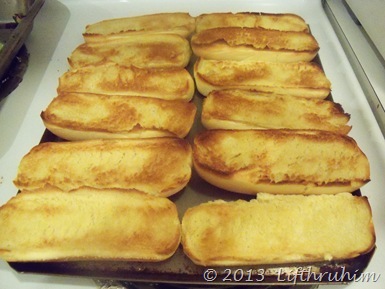 To toast, we just thinly spread some butter on the cut side of the roll and broil under the broiler until browned.  You could be healthy and just brown them without the butter but believe me the butter tastes much better!

Place meat on bottom half of sandwich roll, put the top on (wait for it) the top and serve with au jus for dipping.  Or you could be like my husband and forgo the dipping sauce and just put a bit of bbq sauce on your sandwich.  Either way these were a big hit with my family! 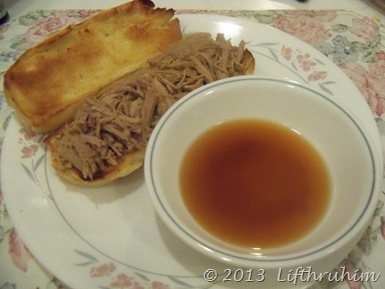