It’s been a long time since I’ve participated in Debbie’s Think Back Thursday meme but when I saw that this week’s theme was “wood” I knew just the pictures I wanted to use.  We took a trip 9 years ago.  9 years!  I cannot believe it’s been that long!  It was an awesome little trip to spend some time together as a family.  I had been a single parent for nearly 1 year while Honeybear had gone to “play in the giant sandbox.” (Think Middle East Military Deployment).  On this trip we drove through Oregon to take a field trip to see crater lake and then on to northern California to see some really big trees. Mostly I just wanted to be able to say I had been to California! 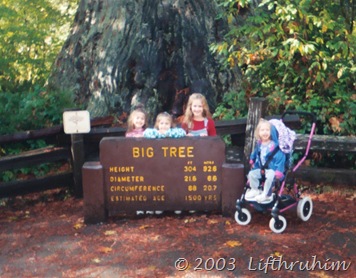 Photographic evidence that at one time Turtlegirl and BooBear really were taller than their younger sister, Tailorbear. You can see little Tailor’s head resting on her arms. She’s barely able to see over that sign. 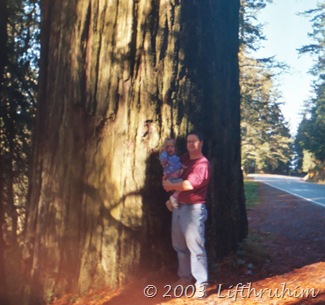 I love seeing pictures of my husband with our children.  Above: he holds a Supergirl who had only just starting walking a few steps independently while he was deployed.  She still used her walker for short trips and around the house but we had the KidKart for longer trips.   Below Daddy with the same tree but with the other three girls. 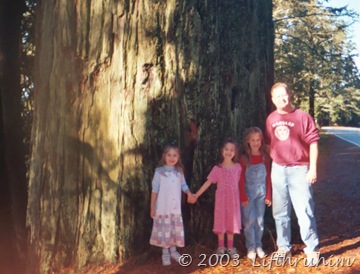 This next picture is not so good but it is all four girls with Daddy.  I think someone was ready to move on to something else. 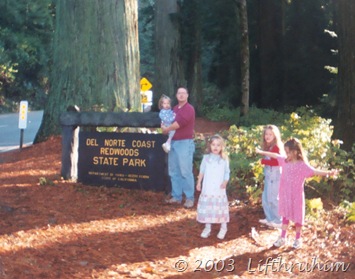 One more picture.  In this one the girls are much more cooperative. Though I think big sister is trying to keep youngest sister in line. 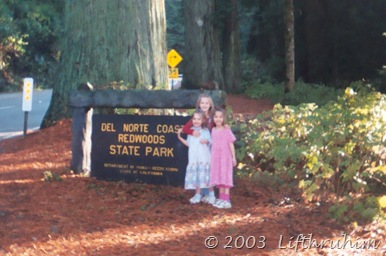 They grow up so fast. I am glad that we took the time to make memories when they were so young.

This post is linked up to Think Back Thursday hosted by Debbie at Debbie’s Digest.  This week’s theme is “wood”.  Come check it out!