I was desperate last week.  We’d entered Cheesefare week, the last week before Great Lent begins for Orthodox Christians.  I had some cauliflower that begged to be used up or else it was moving to the trash can.  I needed it to be milk and cheese based and taste decadent because during lent we eat vegan soups.

This was a complete experiment.  I had no idea how it was going to turn out.  It ended up being a complete and total success.  Turtlegirl declared it “postable and the title should include the words extremely delicious”.  Tailorbear agrees “very delicious.” 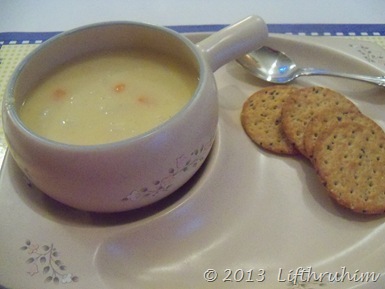 This nearly filled my 6 quart stock pot and nearly everyone had at least 2 bowls.  I think one or two took a third helping as well.

When I make this again, I’m going to play with making a cheese sauce using butter, flour, milk cream cheese, cheddar cheese and parmesan cheese to substitute for the canned cheddar cheese soup.