Our First Pascha {Think Back Thursday}

It’s been many weeks since I’ve done a Think Back Thursday! Thanks Debbie for continuing on week after week!  This week’s theme is Easter. In the Eastern Orthodox Church we call Easter: Pascha.  The word Pascha, ironically, has Latin roots and means Passover.  Using the word Pascha helps make the tie between the Christian celebration of the Resurrection with the Jewish Passover.  The two are linked and the word helps solidify that connection.

When the girls were very little we really didn’t do much with Easter. It’s a long story and maybe someday I’ll blog about it.  In February of 2010 at the start of Great Lent on Forgiveness Sunday our whole family was received into the Orthodox Christian Church.  That April we celebrated our first Pascha.  Oh my!  Words fail.  How on earth do you express all the emotions of Holy Week? The grief of His death and burial and the joy of His Resurrection?  We will be celebrating our 4th Pascha on May 5th. We’ve just finished our 2nd full week of Lent.

This first picture is taken from the procession that happens around Midnight.  The gospel story of the Resurrection is read, we shout and sing: Christ is Risen from the Dead and re-enter the church where the lights will be BRIGHT and there will be much singing and shouting of Christ is Risen with the people shouting back Indeed He is Risen.  And it’s shouted in multiple languages! Slavonic, Russian, Greek, German, and even Norwegian! Boobear is the young lady on the left holding the special bread. 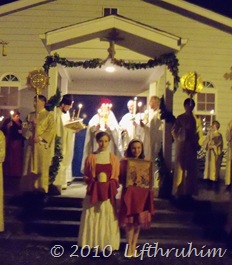 After a bit of a nap (I think we got home around 3:30 am!) we had a late breakfast of Pascha Cheese! We had Pascha Cheese with Pascha Bread, bacon, and hard-boiled eggs.  This with some slight variations has become our traditional “when we wake up on Pascha” breakfast. (And yes somebody had already started eating it before I could take a picture!) 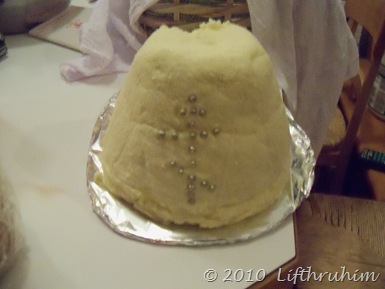 Here is Supergirl after we came home from the Agape Vespers and Agape Feast.  A little boy who won the bunny in a dress during the Egg Hunt gave the bunny to Supergirl.  She named her Dorothy. 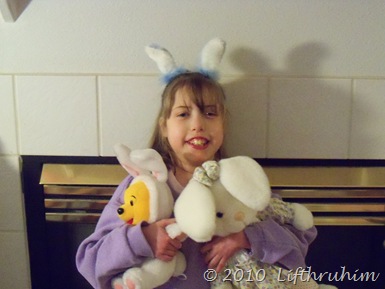 I don’t have as many pictures for 2010 as I thought I did so moving on to 2011! Here Supergirl poses in her beautiful Pascha dress. 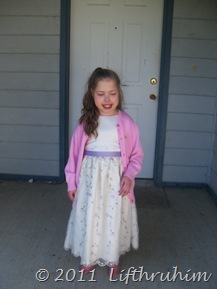 This was our Pascha basket for that year.  The Beef Jerky represented the beef we did not eat during lent. You can see a stick of butter (traditionally the butter is molded but I am lazy and I do not have a mold!).  You can see the Pascha Bread and in the container was my substitute for Pascha Cheese. 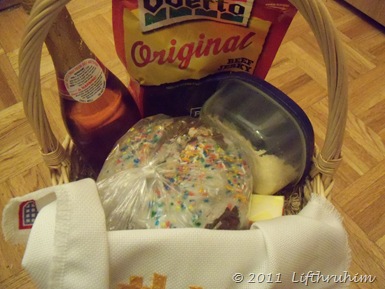 In 2011, Boobear was part of the procession again but this time she held the Resurrection Icon.  You can see Father reading the Gospel.  None of my procession pictures really turned out (blurry because people were, well, processing, which means they were moving!) 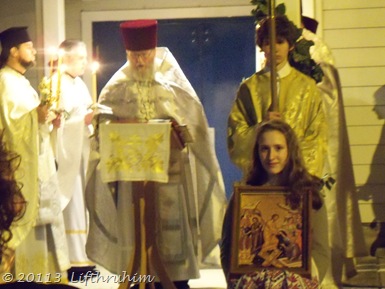 In this picture you can see how bright the inside is now that Christ has risen! See the beautiful greenery for decorations? My daughters helped to make garlands and window decorations and I think Boobear helped with putting up the decorations.  Even these pictures can not capture the immense joy and excitement that filled the building.  Christ is Risen! He has trampled down death by death! 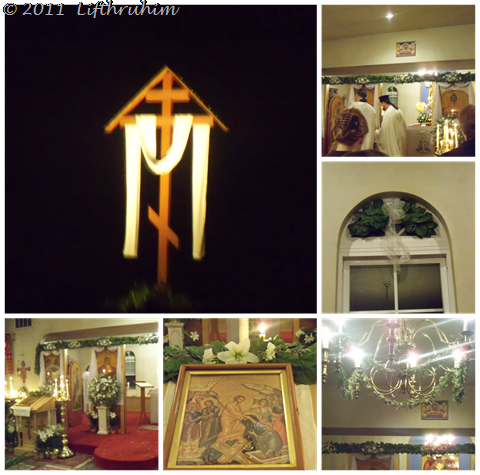