Shopping on Thanksgiving sends the wrong message to my children.

A large number of retail stores have announced that they will open on Thanksgiving. I think I read that Kmart plans to stay open for something like 41 hours straight for their Black Friday sales.  Really?  Seriously?  41 hours?

I won’t be shopping on Thanksgiving.  I highly doubt that I’ll go shopping at all over the weekend.  I’ve never been a fan of Black Friday sales.  Maybe it’s because my first job was in retail?  Maybe it’s because I don’t really like shopping?  It isn’t because I don’t like saving money and it certainly isn’t because I don’t like buying gifts. I could blame it on not having any money to spend but some years I have had money to spend and still didn’t participate in Black Friday sales (and those were in the days when stores were actually closed on Thanksgiving and didn’t open until Friday morning, you know, after sunrise). But this post isn’t about Black Friday sales on Friday.  This post is about shopping on Thanksgiving. It isn’t part of my family’s traditions. 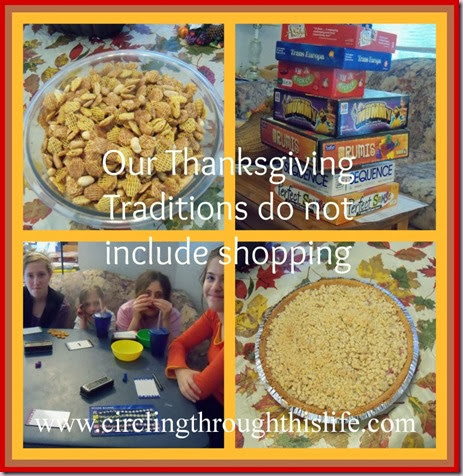 A few weeks ago a friend posted as her Facebook status that she didn’t agree with the “because everyone deserves a day off for family” shopping boycott.  At first, I wasn’t sure that I agreed with her.  I mean really doesn’t everyone deserve a day off to spend with family? Isn’t that a great reason to NOT shop the Black Friday sales that start on Thanksgiving? Maybe not.

I sat and pondered and read through the comments and had one of those light bulb moments.  She had pointed out that many many many people do not, have not and cannot have a day off at Thanksgiving. They deserve to have a day off but they can’t have it.  Doctors, emergency responders, police officers, fire fighters, nurses, military personnel, guards and so many more must work.  Their jobs are essential. My friend specifically mentioned pastors and restaurant employees.

My mother-in-law is a retired nurse.  She’s had to work her fair (unfair?) share of holidays (not just Thanksgiving, but Christmas and other holidays too!) over the years. My aunt is a nurse in a nursing home and provides in home care for some elderly patients.  She also always works on Thanksgiving.  My daddy worked for the Equipment Division of Public Works (usually for the Street Department). If snow needed to be plowed on Thanksgiving, he would have had to do it.

One argument I read pointed out that if you shop on Thanksgiving you are part of the problem.  What problem?  The problem of keeping those retail employees from having the day off to spend with their families. Another article countered with “if you watch sports or enjoy sports or any kind of entertainment you are also the problem because those players, those concession workers, those coaches and others involved are working in order to entertain you and that messes up their their ability to spend Thanksgiving with their families. The counter point argued if you’re going to not shop because it employees have to work, then you shouldn’t do entertainment (other than board games which by-the-way is what my family does: play board games on Thanksgiving) for the same reason that those employees are also missing out on spending time with family.

I think I agree with the idea of being consistent.  I think it’s a valid point. But again, I’m not in a “Black Friday Rage” over people having to work on Thanksgiving.  Maybe I was last year or the year before.  I won’t say I haven’t heard myself complain about stores being open but this year I realized it’s more.  It’s deeper.  It hits at the core of why my family celebrates Thanksgiving.  We don’t celebrate family.  We don’t gather to just spend time with family and watch football.  I don’t even like football.

We celebrate Thanksgiving by spending time focusing on the blessings.  We contemplate what we have and strive for being content with what we’ve been given. Even the year that my father  died.  His funeral was on a Monday, the Monday of Thanksgiving week. That had to be the most difficult Thanksgiving I have ever experienced.

Thanksgiving isn’t about the food, the football, or even about having the day off.  It’s about being thankful.

It's not the *working* on Thanksgiving "because it keeps them from their families" that bothers me. The retail stores opening on Thanksgiving bothers me because of the rampant contradiction of being thankful and content with what we have. It's the commercialism and materialism that is promoted with all the special retail sales. There is no reason for retail sales to open on Thanksgiving in order to sell at a "special sale price" items that would and often are sold at the same price the next day. It just promotes greed: "Oh no If I don't stand in line and wait at Stuff-Mart for them to open then I won't get any of x, y, z."

I won't shop on Thanksgiving. I won't do it because I don't like the message that it sends to my children. How can I focus on being grateful for my blessings and then cut dinner short so we can go buy more stuff?