Christmas: It’s not a Birthday Party

I do celebrate Christmas.  This isn’t a post about why you shouldn’t celebrate or that Christ wasn’t really born on December 25 or that Christmas is pagan.  Nope.  I spent a few years in the “Christmas-is-pagan-therefore-we-can’t-celebrate-it” camp. That is a whole ‘nother topic for another blog post and not one I want to tackle today. I grew up Catholic. (Yes, Roman Catholic. though there are several “rites” that are in communion with or fall under the Bishop of Rome. The largest is the Roman Rite which is the one that most people think of when they think “catholic”.) We always celebrated Christmas which included attending mass, though we usually did that on Christmas Eve (the 4:30 service though I always wanted to go to the Midnight Mass which wasn’t really at Midnight it was 10:30 or 11pm). We celebrated advent with a wreath and lit a candle each week.  We decorated a tree.  We had presents.  We had both religious aspects (Nativity Manager Scene) and secular parts (Santa!!). It was all wrapped up together.  Whenever I think of Christmas I think of my dad singing Gene Autry songs like “Up on the Housetop.”

When we were first married, my husband and I celebrated Christmas just like I had as a child only with a Lutheran church service instead of Catholic Mass.  A mixture of secular, American traditions, and religious focus on Christ.  This blended approach worked fine until the twins were born.

The birth of the the twins, the long hospital stay, being technically homeless and seeing God work all things out caused us to seek out a deeper relationship with God. We wanted more emphasis on God.  We wanted a truly Christ centered experience for Christmas.  We began to study Christmas and remove those things that were “pagan” or weren’t religious.  We celebrated Christmas for the last time in 1998. We thought we were doing the right thing. [We were seeking after Christ and so it was the right thing at that time.]

One aspect of the “not celebrating” argument is the concept that Jews didn’t celebrate their birthday. One person (I do not remember who wrote the article or the title) stated it something like this: “How would your husband feel if he came home from work and saw that you had baked a cake, decorated the house and had wrapped gifts but you told him ‘hey it’s my ex’s birthday and I thought we could celebrate and give gifts to other people.”   Somehow this, combined with the reality that the only birthdays celebrated in the Bible were associated with a) pagans and b) death, made sense to me and we decided that so much of everything “Christmas” was “pagan” so we stopped.

This wasn’t easy.  I loved Christmas.  I loved all the colors, the decorations, and the gift giving. I wanted the warm fuzzy feelings.  I loved the music.  I missed it.  We focused more on Thanksgiving and gave gifts to the girls then but still I missed Christmas.

A few years went by and we decided to evaluate our stand.  We needed to examine our logic. Wedding rings have pagan origins.  The days of the week and the months of the year certainly do not have roots in Christianity. Should we throw out everything in our culture just because it started out pagan? [Never mind the articles that I’ve since found that dispute much of the “Christmas is pagan” aspect. Maybe we wouldn’t have thrown Christmas out the window if we’d read those first but God does work all things out.]

We decided that we were Americans and we were going to celebrate a more secular Christmas. Not because we didn’t want to seek after Christ with every breath but because we did.  We thought we could divorce the secular celebrations from the questionable religious aspects.

By Christmas 2009 my paradigm understanding of God had shifted so much that I realized I very much missed celebrating the incarnation of God.  God took on human flesh and walked among His people. He was God and He was Man and came to save His people.  That Christmas we experienced our first Orthodox Christmas.  We finally found what we needed.  The colors, the decorations, the gifts, are all an outpouring of a heart overflowing with joy because God became Man so that we might become God.

We don’t have a birthday party for Jesus.  We won’t have a cake for him (I have never done that).  We won’t sing Happy Birthday. We will however rejoice in the birth of our Lord and Savior and celebrate the Incarnation of the Lord.  God came down from Heaven, and became Man.

I will eat my Christmas cookies, wrap my presents in Santa covered paper, put them under a Christmas tree all the while singing carols.   Wishing you peace, joy, love and contentment.  Merry Christmas. 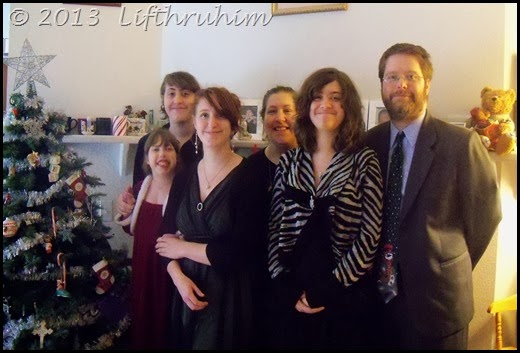