These yummy little half potatoes are a cross between twice baked potatoes and traditional potato skins.  They make a great appetizer and awesome served with Buffalo Style Chicken Wings.  I’m not a football fan, but if I were and I was hosting a Super Bowl game watching event I’d be serving some of these Deluxe Potato Skins along with those wings and other finger foods.  This is one of my family’s favorites when we plan a finger food or “junk food” night supper. They’re becoming a tradition with our movie/episode marathon weekends. 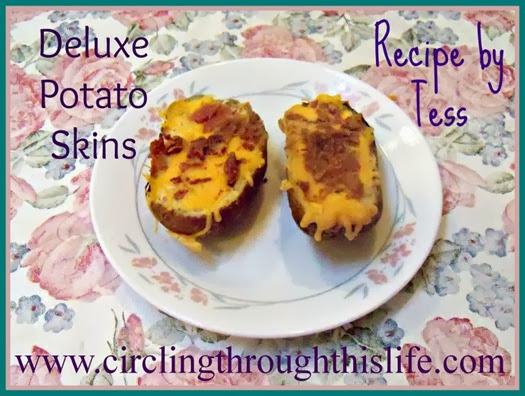 I liked using smaller potatoes for these since they have a potato filling.  When I make more traditional potato skins that are just topped with cheese, bacon bits, and chives, I like the potatoes to be bigger.

First we (yes I had my my girls helping!) scrubbed, pierced and baked the potatoes. I like to make sure that these are very tender.  It’s no fun trying to mash up the filling when it isn’t soft enough.  Let the potatoes sit until they are cool enough to handle then slice lengthwise and using a spoon scoop out the inside leaving just enough potato to hold the skin’s shape. 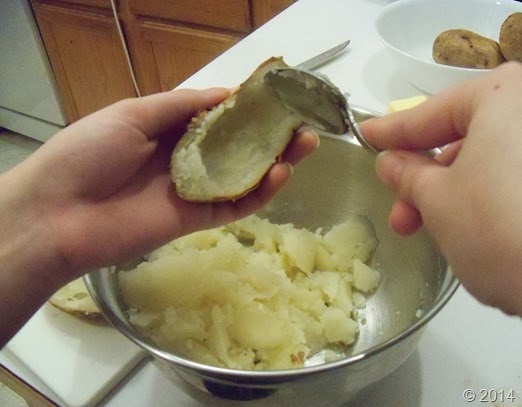 Set those empty shells aside. We’ll come back and fill them after we’ve doctored up those potatoes.  I add butter, sour cream, chives, bacon bits, shredded cheddar cheese, garlic powder, salt and pepper and mash it all together with those potato insides.  All the good stuff you’d put ON a baked potato but all mixed inside. 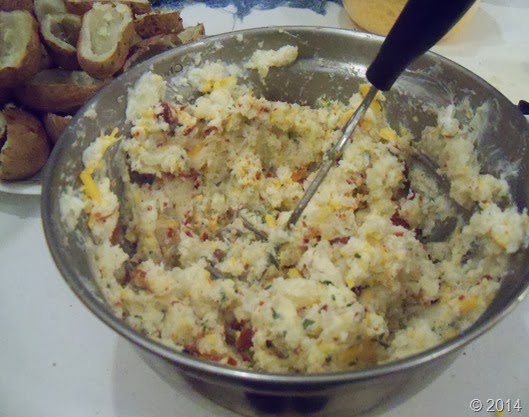 This also makes a fabulous, amazing, incredible potato casserole to serve as a side dish. It goes perfectly with ham for a nice holiday dinner. [Yes, I’m looking forward to Pascha already]. I also use this for twice-baked potatoes.  But for twice baked potatoes I heap the filling into the potatoes.  As you can see from the photos below I slightly overfilled these.  You want them slightly under-filled for potato skins so that you can load them with more cheese and bacon bits and top them with sour cream at serving time. 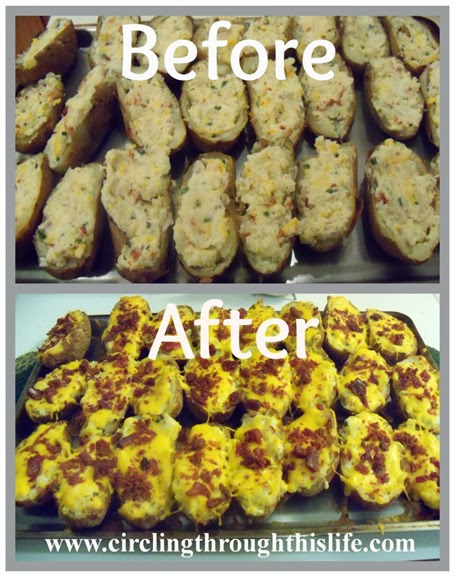 I like to bake up the extra filling in a casserole dish.  Plop the mixture into an oven safe round casserole. Top with more shredded cheese. Bake at 350ish until cheese is melted, top is starting to brown and potato mix is hot and bubbly.  Both are extra yummy topped with sour cream or with sour cream mixed with ranch dip mix.