S is for Snow!

This past weekend we had snow.  OK I know most of the country has been getting snow and lots of it. We weren’t.  While the Polar Vortex wreaked havoc on the Midwest, South, and Eastern parts of the US, we here in the Pacific Northwest experienced very mild and unusually warm January weather.  February arrived and that pesky short month brought cold weather and snow!

The first snowfall did not amount to much.  What little bit stuck didn’t accumulate to any kind of measureable amount and our school district (that tends to cancel readily) didn’t even have a late start!  The snow was gone quickly.  That snow was no big deal and is fairly typical for us: just enough snow to look pretty but not mess up life.  I can deal with snow like that.

This past weekend?  Well it’s been a couple of years since we’ve had snow like that! It started Saturday during the late afternoon.  Big beautiful flakes of sticky snow.  And it kept falling and it kept sticking.  We went to bed and there was a thin blanket of snow barely covering the yard.  You could still see the grass poking up.  (Yes, we have grass here. And in the winter it is a very lovely green color, not that yucky dead brown color of exposed grass you see in the winter in places like Minnesota.) We wondered about whether or not there would be anymore and didn’t really think about how it would affect church.  I mean I was worried about our drive to church but Honeybear didn’t seem fazed at all by the snow.

This is what we woke up to though on Sunday morning: 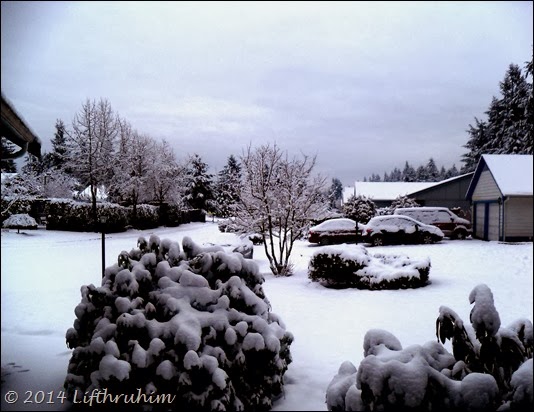 The above picture is the view from my front door.  It’s nearly the same as from my bedroom window (but I don’t have a shot of that to share).  From my bedroom it was easy to see that no little tufts of grass were peeking out.  This is a covering blanket of snow.

The picture below is the view from our back door: 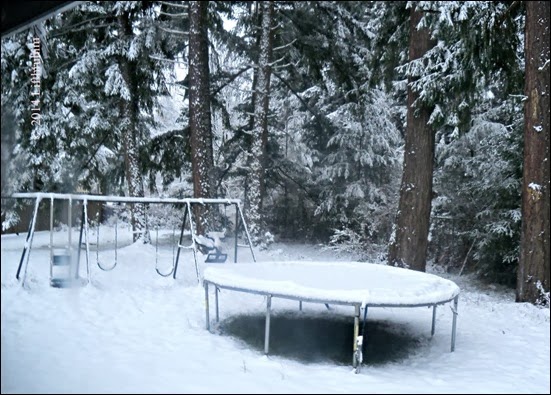 Another backyard view!  Isn’t it gorgeous! 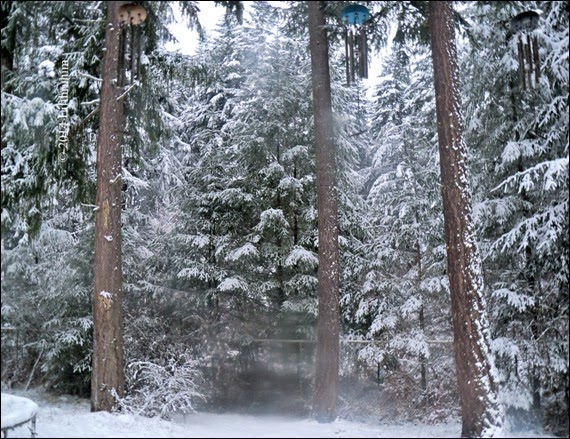 Even with 4-6 inches of snow, it didn’t stick around that long!  The weather became very warm and so much snow fell from the trees that it looked like it was another snow storm!  Here’s what the back yard looked like late in the afternoon: 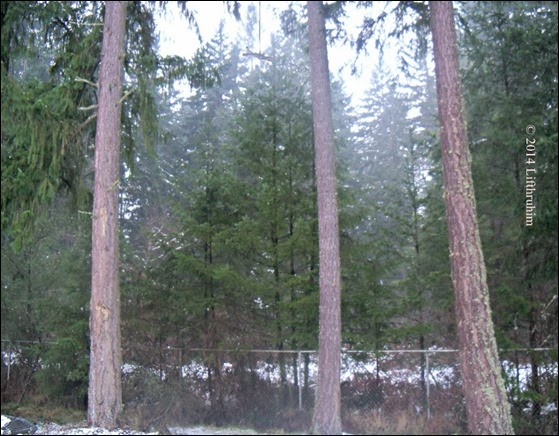 We did miss church on Sunday morning. Tailorbear measured 4 inches of snow in the front yard. With a driveway to shovel, a van to unbury and the real possibility of icy roads we decided to stay home.

By Monday morning the roads were clear and it was business as usual.  By Tuesday morning you really couldn’t tell it had snowed at all.  Such is life on this side of the mountains! And that is not a complaint. Snow is beautiful to look at but I don’t like having to deal with it on a regular basis.