3 Ways to Love Your Spouse {L is for Love}

I have frequently said that Honeybear loves me far more than I love him. I am not a great wife. I am not the woman I want to be.  He’s not perfect.  Far from it actually.  Sometimes I get dragged down into that selfish place of if-he-really-loved-me-he’d-do whatever it is he’s not doing that I want him to do. 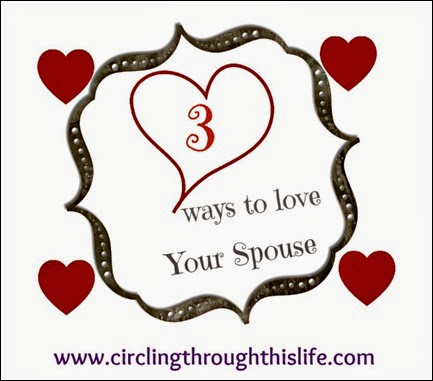 True love doesn’t look like the fairy tales (well setting aside Once Upon A Time which is a fabulous show but very twisted with the fairy tales).  Love is an action.  It’s a choice.  It’s often sacrificial and always concerned with others not self.  When I look at love from that perspective,  I can see the different ways my husband does love me.

So here are 3 Ways to Love Your Spouse

1.  Listen to Music You Barely Tolerate.  For 21 1/2 years I have thought my husband shared my interest in the music of U2.  He’d even turn up the radio for me. I just found out this past weekend that he really doesn’t like them. He tolerates them for my sake because he loves me and he knows I really like U2 music.

2.  Eat Your Partner’s Favorite Food Even Though You’d Rather Eat Something Else  My Daddy made the bestest spaghetti sauce in the whole world.  He called it “stuffed peppers” but really it isn’t anything like those stuffed pepper recipes I’ve read.  He would stuff several green peppers with uncooked hamburger and then make more meatballs with more hamburger.  He browned Italian sausage and included that too.  He put the peppers, sausage and meatballs in a giant roasting pan on the stove and added lots of tomato sauce, and then he’d let it cook all day long.  We’d serve the sauce over spaghetti noodles and mostaccioli noodles. (Don’t know what those are?  They look like Penne Pasta to me.)

So I call the sauce GrandpaLarry sauce.  I serve this sauce to my family for years and then one night my husband finally confessed to me that he’d really rather eat his spaghetti noodles with a meat sauce rather than with meatballs. He knows how much I love that sauce and how I make it ‘cuz of my daddy.  So now sometimes I make a variation of GrandpaLarry Sauce that is more of meat sauce.

3.  Make Late Night Drive for French Fries (or other special food).  When I was pregnant with my oldest I craved French fries.  Not just any fries though.  They had to be McDonald’s French Fries. I didn’t have morning sickness. I had nine months of all day long sickness and sometimes the only food I could keep down was the food I was craving when I was craving it.  Honeybear made quite a few McDonald runs at 9:30 at night.

I am convinced that Honeybear loves me more than I love him.  He reassures me though that he feels loved. He understands that love is a choice and an action.  I choose to love him when I do his laundry even though I want to strangle him and I know he chooses to love me when he does those three things above even though I am not always so lovable and he’d rather strangle me.

Do you do certain things for your spouse because you love him?  Do you recognize when your spouse is loving you?