Cats are, I think, quirky by nature but some some kitty habits are strange even by cat standards. As a married couple Honeybear and I have adopted 4 cats and had one cat adopt us. Each cat has been completely different in personality and each one has had a least one quirky habit! 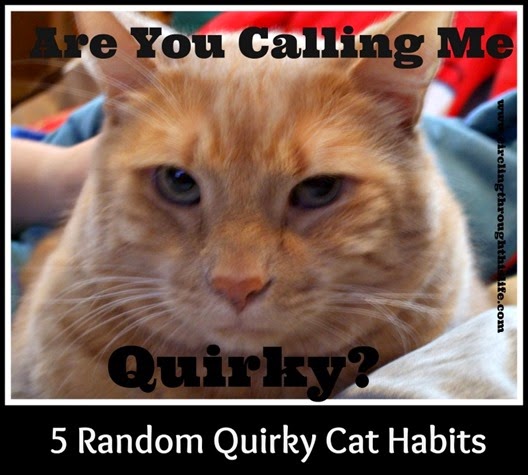 1. Cats like to play. That’s not quirky.  Cats like to jump up on things.  That’s not quirky. But Daisy liked to play with pens. She loved them. She loved to bat them all over the floor and chase them. She preferred pens or pencils over traditional cat toys like balls of string.  What made her really fascinating to watch: she would help herself to her toys. She would jump up on the desk, pull a pen out of the cup, drop it on the floor, jump down and begin her play session.

2. Mo was our first cat. He did not like Honeybear. He tolerated me.  He did seem to think Boobear was ok.  Mo liked to escape from the house. It was like he had to get away from us.  The quirky part?  He always came back.  He didn’t seem to like us and we thought he was running away the first couple of times but he always came home.

3. George is buff colored tabby.  He’s a big cat.  He likes to eat. I mean he loves to eat. He gets so excited and vocal about his food. His litter mate, Lacy enjoys her food but she is much more “normal”.  She’ll meow a bit and rub against your leg and then wait, nearly patiently, for you to fill her dish.  I think she exemplifies normal about-to-be-fed kitty behavior. George?  He paces.  He yowls,  He rubs against you.  He tries to climb the counter.  He tries to climb your leg.  He wants his food and he wants it NOW. 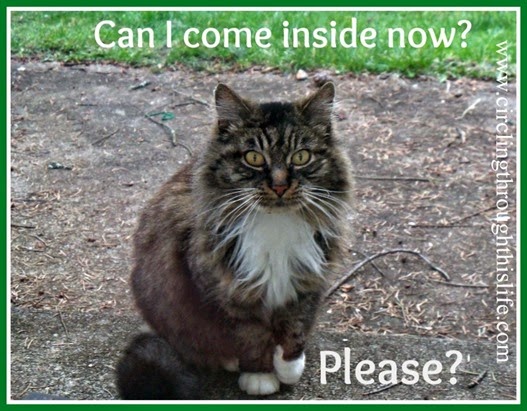 4.  Speaking of eating and George.  He has another strange eating habit or rather about to eat habit. If I am in the bathroom (you know taking care of nature’s call), he *must* rub against my leg and be petted before he will eat his food. He will sit in front of the toilet and wait.  He won’t move until I pet him. He’s worse than my children.  I cannot go to the bathroom alone. He seems to just know when I have “to go” and follow me.

5.  Daisy had a thing for Arby’s roast beef.  At least that was meat.  Otherwise she just wasn’t too interested in people food.  Lacy doesn’t seem to care about people food either though I suspect she likes yogurt as I have found a yogurt container left on the table licked clean. But the quirky cat thing?  That’s George again. He loves fresh lettuce leaves and canned green beans. You can not leave lettuce out. We often get fresh lettuce from the Farmer’s Market or Bountiful Baskets.  If you leave it on the floor while unpacking, better make sure he is not around.  We discovered his love of green beans when he decided to help himself to Supergirl’s dinner. Thankfully she was finished.

Lacey’s personality seems to be pretty much typical cat.  She likes to hide.  She likes to squeeze into tiny spaces and her favorite thing to do is sit in a box. Any box will do but the smaller the better. She and her litter mate George seem so different it’s hard to believe they are siblings!  Mittens was a stray who adopted us. She was completely an outdoor cat but she loved us and we loved her. We think she met an untimely death from a coyote. She either wasn’t around long enough to express her own quirkiness or she was like Lacey and was another example of “typical cat.”