It’s only October.  We still have to get through Halloween, my anniversary, and Thanksgiving before we even get to December.  So why am I writing about X-mas?  Because this week’s letter over at Ben and Me’s ABC Blogging is X.

I admit I was stumped.  Yes I could use a word like exciting or exhausted and focus on the x part of the word but I wanted to see if I could actually find a word in the dictionary from the x-section.  Did you know that the x-section is barely two pages? I came across X-mas.  Did you know it was in the dictionary?  I don’t think I’ve really thought about it but I guess it makes sense. 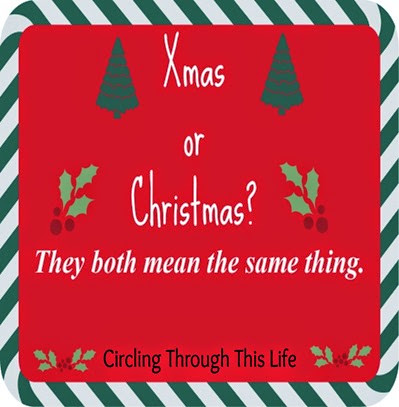 Ok so X-mas means Christmas according to the dictionary.  It certainly has been widely used in December as a replacement for the word Christmas.

I know many people, wonderful Christian people, who refuse to use x-mas and prefer to write out Christmas each and every time. It seems as though these good people are afraid of taking Christ out of Christmas (have you seen how secular the holiday has become with all the emphasis on sales merchandise for all your gift giving needs? It seems that it doesn’t matter if we use Christ or X in front of mas there’s a real possibility that Christ may already be missing but that is another topic).  But does using an X instead of Christ really remove Christ from Christmas?

No. Not at all.  Even the dictionary confirms this:

The American Heritage High School Dictionary Fourth Edition even has a foot note about usage.

Xmas has been in use for hundreds of years in religious writings where the X represents a Greek Chi, the first letter of [Greek Letters I can’t type] Khristos, “Christ” in this use it is parallel to other forms like Xtian “Christian.” But people unaware of the Greek origin of this X often mistakenly interpret Xmas as an informal shortening pronounced (eksmas). Many therefor frown upon the term Xmas because it seems to them a commercial convenience that omits Christ from Christmas.

Did you catch this part, “mistakenly interpret Xmas as an informal shortening pronounced (eksmas)?”  If you see it written as Xmas or X-mas (the dictionary uses both ways) go ahead and pronounce it as Christmas because that is indeed what it means.

Years and years ago I was highly offended when I would see Christmas written as X-mas. I was one of those who mistakenly thought it was a way to secularize the holiday and take Christ out Christmas. Now, I just laugh when I see people who do want to take Christ out of Christmas and think they have succeeded.  I laugh because I find the irony hilarious. Sometimes I am not sure I want to correct them.  (Does that make me a bad person?)

I know it seems a little early to be discussing Christmas before Halloween.  I try to put off thinking about the Nativity until at least November 15 when the Nativity fast begins but I couldn’t resist the topic for my X post this week.