There is a reading list floating around Facebook that purports to be connected to the BBC. The idea is that you copy and paste the book list to your notes and then bold the ones you have read and use italics for the ones you started but never finished. I decided I wanted to do more with the list so I’m making a it a blog post instead of an FB note.

Some of these are collections.  I don’t think a person should be forced to read a collection to get credit for reading “a book.”  No, those are multiple books. For collections that I have read or started to read some but not all of the books, I am going to list out the individual titles. Except Shakespeare. That’s too many! Also for me I think I’ll use pretty purple font to denote those books that I want to read or have started but intend to finish.  So purple is “I want to read,” and purple and italicized is “I started reading and someday I intend to finish.”  Regular boring italicized is started and never finished. I’m not sure if I have any of those. 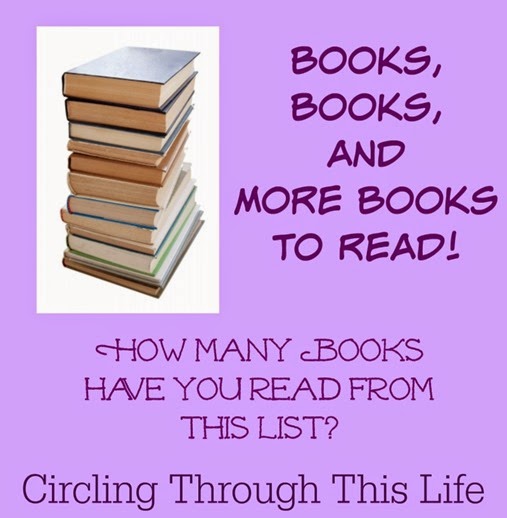 So here is the list of 100 Books and some comments from me:

2 The Lord of the Rings - JRR Tolkien

3 Jane Eyre - Charlotte Bronte ~ Boobear loved this book.  I struggled with it. I started reading it and had to stop and then I finally finished it. Not one of my favorites.

5 To Kill a Mockingbird - Harper Lee

6 The Bible ~ There are 66 books in the protestant version.  27 in the New Testament. I’ve read all of those multiple times.  I’ve read most of the OT but not all of the prophets and only one of the books that is included in the deuterocanonical books. (Tobit, in case you are curious.)  I have every intention of reading all the books.  2015 might be the year!

7 Wuthering Heights - Emily Bronte ~ I know I’ve read this but it’s been so long I don’t remember it at all. I’m leaving it bold and black but I did just download a free copy to my Kindle in case I decide to read it again to refresh my memory.

8 Nineteen Eighty Four - George Orwell ~  I keep thinking I have to read this one but then I realized I haven’t. I own it. Maybe someday I’ll put it on my to-read list.

9 His Dark Materials - Philip Pullman ~ I have never heard of this one.

12 Tess of the D’Urbervilles - Thomas Hard ~ Everyone keeps telling me that I should read this because my name is Tess.  Is that really a good reason to read a book?

14 Complete Works of Shakespeare ~ Seriously, the complete works? I can’t swear that I’ve read every single play. I have read all the sonnets and many (if not most) of the plays.  But Shakespeare plays were not meant to be read; they were meant to be watched. I’ve not come close to seeing them all. Maybe I’ll get around to reading the plays I haven’t read yet.

18 Catcher in the Rye - JD Salinger

21 Gone With The Wind - Margaret Mitchell ~ I have seen the movie so many times. I think I started this years ago (like in high school) and never finished but I’m leaving it like this.  Maybe I’ll read it but it’s not a high priority.

24 War and Peace - Leo Tolstoy ~ I think this is one that I should read.

25 The Hitch Hiker’s Guide to the Galaxy - Douglas Adams ~ I might have to try reading this one just to see what all the fuss is about.  I think it is important for cultural literacy.

30 The Wind in the Willows - Kenneth Grahame

31 Anna Karenina - Leo Tolstoy ~ I just added this to my Kindle Fire.  Free version. Maybe I will tackle it someday.

36 The Lion, The Witch and the Wardrobe - CS Lewis ~ Of course I’ve read this if I’ve read the Chronicles of Narnia! It’s part of the collection!

39 Memoirs of a Geisha - Arthur Golden

45 The Woman in White - Wilkie Collins

49 Lord of the Flies - William Golding ~ I wish I had not read this book. I found it so disturbing when I read it. Maybe I was too young? It was 9th or 10th grade I think. Maybe? I have not made my girls read this one.

56 The Shadow of the Wind - Carlos Ruiz Zafon

57 A Tale Of Two Cities - Charles Dickens ~ I read this because my 9th grade teacher introduced us to Charles Dickens and I wanted to read the book since I had learned the quote.

58 Brave New World - Aldous Huxley ~ Two of my girls have read this one. Turtlegirl says it was “kind of disturbing.” Since I made them read it, I guess I should read it.

60 Love In The Time Of Cholera - Gabriel Garcia Marquez

61 Of Mice and Men - John Steinbeck

70 Moby Dick - Herman Melville ~ I have no desire whatsoever to read this book. None.

76 The Inferno – Dante ~ It is possible I read this but I don’t remember.

84 The Remains of the Day - Kazuo Ishiguro

88 The Five People You Meet In Heaven - Mitch Albom

91 Heart of Darkness - Joseph Conrad ~ I own this and at least one of my daughters have read it. Maybe I will read it someday.

97 The Three Musketeers - Alexandre Dumas ~ Turtlegirl has read this and we’ve watched a couple of different movie versions. Someday I will finish reading it.

99 Charlie and the Chocolate Factory - Roald Dahl  ~ The movie with Gene Wilder scared me. I haven’t seen the Johnny Depp version. I’m not sure I can get past the movie to read the book.

For another list of Books that Everyone Should read you can check out GoodReads.  How many of these have you read? If you have posted about how many you’ve read please leave me a link in the comments. I’d love to check it out!