In Freedom’s Cause ~ An Audio Drama Review

We are a literature loving family of all girls. Well, all girls except for Dad. So having only daughters I never really explored books by G.A. Henty. I know they come highly recommended in home school circles as great adventure books based on historical events. What I didn’t realize though was that my husband liked G.A. Henty. He spends close to two hours a day driving around, and I’ve been on the look out for things he can listen to in the van.  Tailorbear found her daddy’s copy of the Classic Illustrated version of In Freedom’s Cause and when she saw the cast list for this audio drama version she decided she also wanted to listen so I expressed strong interest in receiving In Freedom's Cause Single Package. 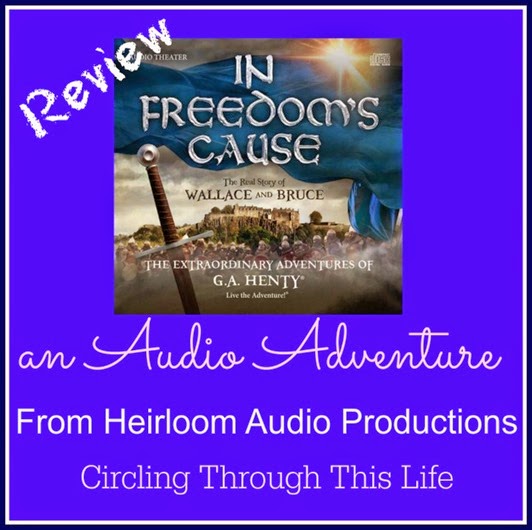 I think it would be best to describe this audio theater production as an adaptation of G.A. Henty’s novel. John Formof, who wrote and directed In Freedom’s Cause: the Real Story of Wallace and Bruce, did his own research into the life of William Wallace and wanted to bring out more of Wallace’s faith as the backbone of his strength.

The three parts are:

I do wish that the study guide included answers to all of the questions. It would make it easier to use from a parental perspective. I want to foster independent study and learning in my children but I do not always have time to listen to the story 3 or 4 times to make sure that I know all the answers to the comprehension questions and I do not always know what they are trying to get at with some of the Thinking Further questions. I do know most of the vocabulary but having the words already defined would make this a much more valuable tool for homeschooling families.

In addition to the sets of questions, the study guide includes notes about the history of Scotland, suggestions for further reading, and three short bible studies.

I found the Study Guide difficult to use. It’s very pretty and the graphic design is stunning but because the backgrounds are colored and textured it makes reading the text very difficult. It also does not print well. It would be easier to use the Study Guide if the pages included graphics or pictures rather than the paper scroll look. I admit I do like how it looks but I’d rather have something that I can use.

I found the audio drama overall well put together and well presented.  The actors involved sounded as if they truly enjoyed participating in the story.  The script followed the main plot points of the actual story pretty well from what I can remember (although I read the Classics Illustrated comic book version of the book and not the actual book).  It brought back my desire to read both the comic and the actual story.

My one criticism was the name of the main character, which if you are familiar with the book can distract you from enjoying the story.  In the book his name is Archie Forbes, but in the drama his name is Ned.  However, there is one scene in the audio drama where the uncle asks him if his name was Archie, which seemed to be a 'nod' to the story.

Tess Note:  In the Behind the Scenes documentary we learned that the writers used the names Ned and Gerald because those were the non-historical boys from the previous production. 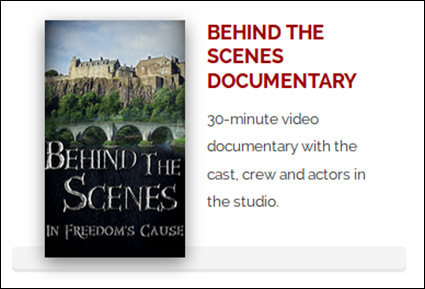 I enjoyed it. It was an interesting story. I really didn’t like mom though in the beginning. It’s my issue but the whole pushing of the faith was too much for me. The mom’s character was good though. The voices were fantastic.

I liked it. It’s good. I like how his mom told him about his father’s death. She saw his father stabbed with a sword. I like how Ned and the girl met when she was up in the tree. I like how they tell story.

I enjoyed the story and found it interesting as a way to look into Scottish history and important figures. The plot was interesting and driving. It had a wonderful mix of humor and adventure.

I am really glad that I was able to watch the behind the scenes documentary. It gave me background on the choices that the writers and producers made.  Knowing why they choose to emphasize Wallace’s faith or why they added certain scenes helped me to enjoy the story better. It really helped my husband to understand why the main character’s name was changed to Ned.  I think Heirloom Audio Productions may want to consider adding that bonus feature to the Single CD Package as it increased the value of the CD for my family.

All information is correct and accurate as of the date of this review.

You can read my other Schoolhouse Review Crew Reviews to find more great products.