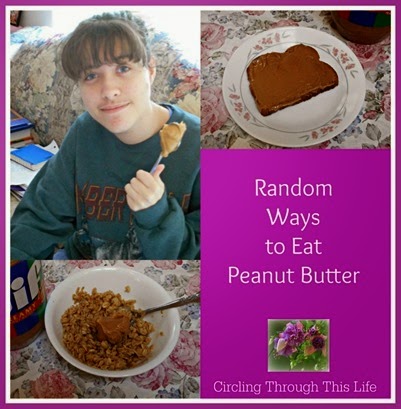 2.  During Lent we eat (or I used to eat and the girls still do) more oatmeal. Oatmeal is really easy to eat vegan.  One way to get some extra vegan protein is to add peanut butter to your oatmeal.

3.  I can’t do this right now because my body thinks apples are too many carbs but my favorite way to eat peanut butter during Lent is to eat it with apples. I use the apple corer/slicer and then dip the apple slices into peanut butter.  Basically use the apple as a spoon. <grin>  Boobear and Turtlegirl love eating it this way too!

4.  A standard around here for breakfast is peanut butter toast. Often the girls sleep in and they need something fast and quick and with protein to eat.  Pop some bread in the toaster.  We do coconut oil in place of butter when we are going vegan.  Coconut butter and peanut butter make a yummy combination.  Tailorbear recommends melting the coconut oil to make it easier to “butter” the toast.  For variations the girls will eat peanut butter on toasted English muffins.

5. It would not be a list of ways to include peanut butter in your diet if I didn’t mention the very American, very favorite sandwich of Turtlegirl.  The reliable peanut butter and jelly. It is best served on very unhealthy white bread and washed down with a glass of milk but no milk when we’re doing the vegan thing and I’m a mean mom and make them eat whole wheat bread.  I do let them indulge though by having home made strawberry jam.  Variations include Honeybear’s basic peanut butter roll up. Take a flour tortilla, spread peanut butter all over one side and roll it up.  I really like peanut butter and banana.  (*Sigh* another food my body doesn’t like anymore).  Peanut butter and honey is tasty as well.  All of these variations can be served on bread, spread on a bagel, or rolled up in a tortilla.  Stop. Hold the presses, my friend Katherine from Oh She Cooks mentioned that she really likes peanut butter and pickle. I have not ever tried it but there you go, another variation on the peanut butter sandwich.