Confession is Good for the Soul!

If you’re a regular reader of my blog then you might already know or remember that I was raised Catholic. One of the huge issues for me as a Catholic was the Sacrament of Reconciliation. It was very formalized and very intimidating. There were certain prayers that you had to say to the priest and then the priest might give you penance like saying 10 Hail Mary’s or praying the rosary.  Granted, I don’t recall ever having been given a penance like that but I was terrified of confession. I dreaded it.  I avoided it.  I did not feel good after it was over. I didn’t feel cleansed or healed. I felt frustrated at going through the motions of something that I did not understand. I went to confession less than a handful of times before I gave up on being Catholic in my 20s.

I spent nearly 20 years as a protestant. I read more books. I studied more theology. I read more scripture.  Usually with the disgruntled Catholic lens covering my eyes. I was convinced, at least for a short while that ritualistic liturgy type services with rote prayers and the same exact service every Sunday was wrong. Not just Catholic but any service like that, including Lutheran!  As time went by and I grew up more and more, I was less antagonistic over “ritual” religion but I was still anti-confession.  Why should I confess to another human being?  Why can’t I just say a prayer and tell God I’m sorry? 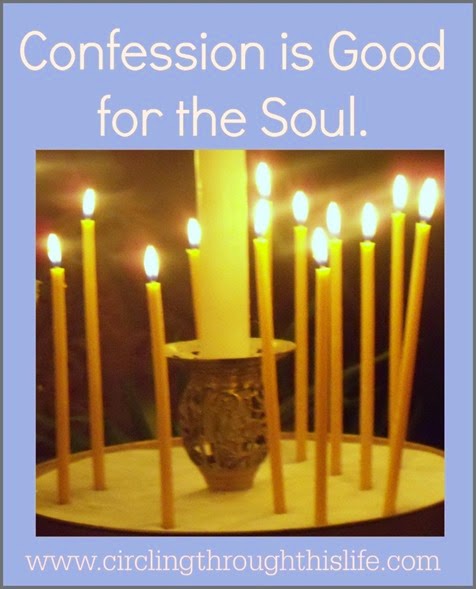 I had a dread of the Orthodox Mystery of Reconciliation or Confession. Would it be the same as my experience growing up?  Would it just be something I avoided as much as I could? Would it truly be healing?  Were these people nuts, the ones who would tell me that they love confession?

There are prayers to say before confession and there are many different ways to do a Self-Examination but the process is less formal and rigid. At least my experience with Orthodox Confession is more inviting and less frightening. I do not need to be afraid that I will say the wrong prayer or forget the words I am supposed to say. It is much more conversational in tone. I pray before going to church and it is very helpful to read through a check list of self-examination.  There is one in my little red prayer book.

There are prayers that that priest says before confession but thankfully I do not have to have them memorized. I don’t say them.  I just hear them.  <grin>.  Sometimes the priest will say the prayer once when there are several who are waiting to confess and sometimes if there are only a couple of confessions he’ll read the prayers at the start of each individual confession.  For appointed prayer times, such as after a Vespers service there is someone who reads through the Psalms. Those who are waiting are quiet and contemplative. Maybe they dread confession as much as I do? I don’t know but I see demeanors change after confession.  The dread is gone.  The frowns are gone. I see the hope and the joy and the smiles.

I do find that Orthodox Confession is good for the soul.  It does bring healing, joy, and yes, reconciliation. Of course I am biased and agree that the Mystery of Reconciliation is more than just confessing my sins but I do think that as a protestant reading and praying through the Self-Examination Before Confession would have been good for my soul too.  The questions are tough. I realized that I do a whole lot more sinning than I am willing to admit even to myself and that I sin in far more ways than I thought possible. I was depressed and discouraged before going to confession but speaking with my priest, getting his advice, admonishment, and encouragement and participating in the prayers wiped away all the depression and discouragement.  Each time I participate in the Mystery, I come away with a renewed sense of Joy and Hope. I feel healed.  It’s difficult to explain and not exactly something I understand but I have become, over the years, a firm believer in regular and frequent confession.  I just have to get past that hurdle of fear and dread and remember the joy, hope, peace, and love that I feel afterwards.

Holy Week draws near, and I feel the stirrings of deep longing and excited anticipation. During Great Lent we begin by forgiving one another, we focus on our own repentance, and then we prepare for the Feast of Feasts, the foundation of Christian Faith, the Glorious Victory of the Resurrection of Our Lord and Savior Jesus Christ.