What a Fun and Busy Weekend!

We’ve had a fun but busy weekend to celebrate a four day Labor Day Holiday break.  Honeybear took Friday off so that we had Friday, Saturday, Sunday, and Monday.

Friday was game day and we got to try out some new games we recently received from USAopoly: Tapple, and Wonky: The Crazy Cubes Card Game. You’ll have to wait until the end of the month for my full review but I’m telling you we laughed and we laughed and we had fun. 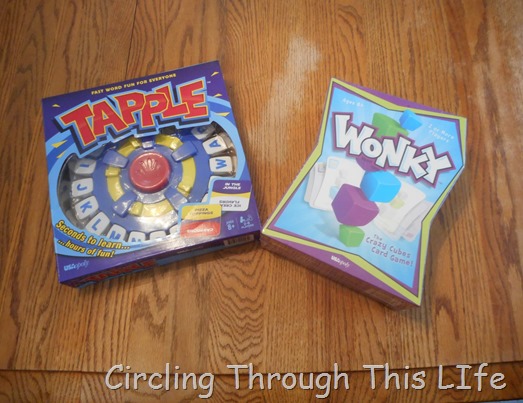 Over the weekend we also played some games we’ve had for awhile.  We always give the girls at least one game every Christmas.  Supergirl loves playing Yahtzee! but she especially loves the 50th Anniversary Doctor Who edition which btw, I discovered is also from USAopoly! Supergirl loves any dice game though but Yahtzee! and Farkle are her favorites.  She and I played Yahtzee! just the two of us and she won!

On Sunday night we attended the Labor Day BBQ and Camp Fire Sing Along at church. Due to questionable weather the event was moved indoors. We still had a fire; it was just in the fireplace in the parish house instead of a in fire pit in the yard.  Of course we had s’mores.  What’s a camp fire sing along with roasted marshmallows squished between graham crackers with chocolate?  This is an annual event that Supergirl looks forward to every year.  She was not disappointed.

Today, Monday, Tailorbear and I canned tomatoes with friends. This is also an annual even that I very much look forward to.  Many hands make light work.  I get to spend time chatting with friends and I bring home canned tomatoes.