Yes, yes I know it is Saturday. I’m back to my old habits of posting Friday’s post on Saturday but I have good excuse.  No really.  I wanted to include a picture so I had to wait until I could get Boobear to email me the pictures I wanted! See, it’s her fault.

1.  A "conversation" I overheard between George, the cat, and Supergirl, the human.  She was getting ready to feed him and he was pestering her. "Meow. Meow." "You have to wait Georgie.  Waiting is hard. I know."   She is a little parrot mimicking what she hears. I just hope that it starting to sink in. She hates waiting. Waiting is very hard for her but I think knowing she isn't the only one who has wait sometimes really helps. Even if it is just the cat.

2. Supergirl had a special Halloween treat. She got to with BooBear up to Boo's campus and participate in "Countdown to Candy" and then go trick or treating at the residence halls!  Supergirl got to color Halloween themed pictures and decorate a cupcake.  Can you guess who Supergirl is? Well, one of her favorite shows to watch is Once Upon a Time. Supergirl decided she would be Zelena, the Wicked Witch of the West. 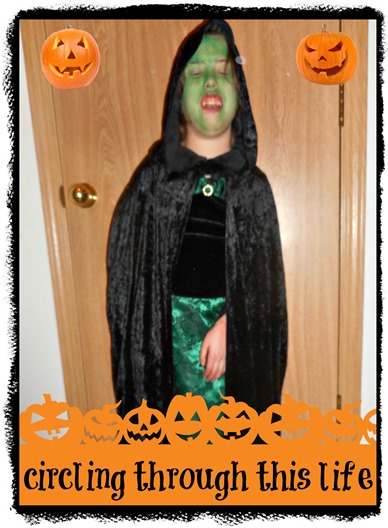 3. It was horrible weather for Halloween this year so I'm thankful that Supergirl had a place to go trick-or-treating indoors. Because the weather was so unpleasant Turtlegirl and Tailorbear dressed up (sorry no pics!). Turtlegirl was a mad scientist with a lab coat, safety goggles and crazy hair!  I really wish I had a picture of Tailorbear. She donned a blue haired wig and we purchased make up crayons for her to do the design on her face.  She added a black cape and became a character from one of her anime shows. No. I do not know which one. I'm a cool mom but I'm not that cool.

4.  So we finally broke down and bought a new TV.  It's a Smart TV.  We do not have cable, or an antenna. We don't have a DISH or any kind of satellite.  We watch DVDs or stream.  We had had been streaming Amazon Prime and Netflix through the Wii to watch on our old analog TV.   We had a Blue Ray DVD player but our TV was not High Def so we didn't invest in Blue Rays.  We had a couple of movie sets (Harry Potter and Lord of the Rings) that happen to be Blue Ray but only because they came that way and were not available in standard format. Our DVD player died.  So we bought a new one.  New TV.  New DVD Player.  We decided to go ahead and purposely buy a couple of movies in Blue Ray format.  So on Halloween we watched the original Stargate movie with Kurt Russell and James Spader.  I think we might invest in more Blue Rays.

5. So I just have to finish this with another overheard conversation.  Supergirl was watching a NEST Video. We have several of the NEST Entertainment history/biography DVDs.  This one was about Joan of Arc. She was emphatically telling the TV "She is not a witch.  Joan is not a witch.  How many times to do I have to tell you people she is not a witch!"  I am enjoying hearing her little conversations. She's quite a little chatter bug.  It is a good reminder to me to be ever so much more careful about what I say and how I say it.  She is a little sponge and she is listening.