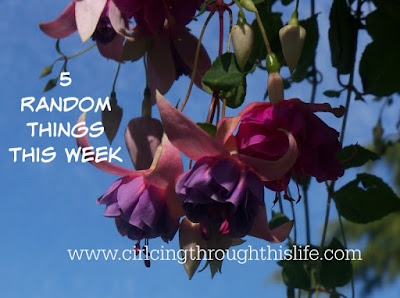 1.  This week Great Lent ended. I am not ready for Great Lent to be over because I don't just don't feel like I prepared myself for Pascha. Thankfully we still have Holy Week.

2.  Dumbledore, our van, ~ yes, Supergirl named him after a certain character ~ broke down on the side of the road last week leaving Honeybear stranded.  The tow truck brought both Dumbledore and Honeybear home. He's at the "car hospital" now, ~ Dumbledore the van, not Honeybear ~ awaiting a transmission transplant.


3. 16 years ago April 23rd was a Sunday.  It wasn't just any Sunday though.  It was Easter Sunday (I wasn't even remotely Orthodox then so it was Western Easter).  It was also the day that Tailorbear walked independently.  She had been walking holding on to the wall or someone's hand but had not taken really been walking.  We had a canister vacuum back then and she would even hold on to it and push it around to walk.  On this day though, she let go and walked.  Unlike her older sisters there were no hesitating first steps.  She had been practicing for so long that she just let go and walked clear across the room.  I was on the phone with my mom (it was Easter after all!).  I do remember when my other girls walked. But not the dates.  Just the general month.

4. Saturday April 23rd is Lazarus Saturday for the most of the Eastern Orthodox Church.  On this day we sing one of my all time favorite hymns.  Rejoice, O Bethany.  I love that hymn so much that I wrote a blog post about last year on Lazarus Saturday! 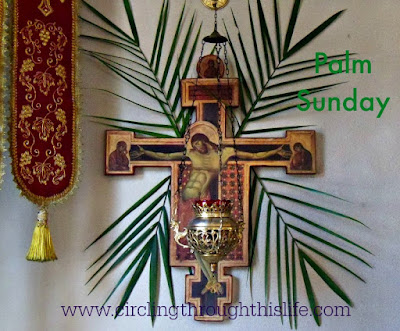 5. Sunday April 24th is Palm Sunday which is the feast of Christ’s triumphal Entry into Jerusalem. It is one of the 12 Great Feasts of the church.  It is closely tied to Lazarus Saturday because it is the raising of Lazarus that caused the people to cry out Hosanna and hail Jesus as the long awaited ande expected Messiah-King.  One of the special hymns for this day (the troparion) displays the connection between Lazarus, the universal resurrection, and Palm Sunday.

By raising Lazarus from the dead before Thy passion, Thou didst confirm the universal resurrection, O Christ God! Like the children with the branches of victory, we cry out to Thee, O Vanquisher of Death: Hosanna in the highest! Blessed is he that comes in the name of the Lord!

I am nearly certain that next week's Five Random Things will not be so Random.  I am sure that I my heart and mind will be filled with Holy Week!
Faith Family Random 5 on Friday