A long long time ago I came home from class at the community college and found my parents sitting on the patio.  It was a beautiful spring day.  I had some life changing news to share with them and I wasn't sure how they were going to take it. I told them I was changing majors.  I was dropping the Pre-Law path and I was seeking a Fine Arts in Theater.  My mother shocked me.  She had been waiting for me to figure it out.  My parents were incredibly supportive.

Setting up stories, choosing angles, picking a theme or moment to frame for the audience thrilled me. My love for telling stories and sharing moments, my love for theater? It seems to have passed to my children. They would put on plays and beg me to record them with the old video camera.  Eventually we got a digital camera that also allowed for taking videos and not just stills. Tailorbear would be the driving force and would make videos of her horse collection or she would grab Supergirl or Turtlegirl and they would make movies.

Combining Tailorbear's love of making videos with her love of drawing and her new desire to learn animation and I have a daughter begging to try creating with the Stopmotion Explosion Animation Kit. 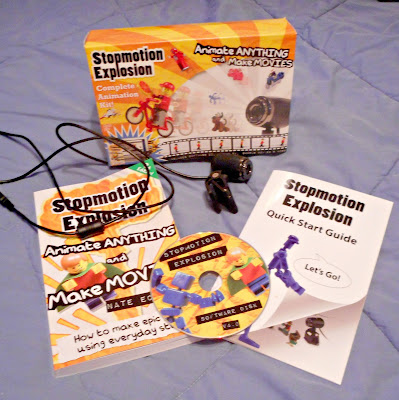 Stop motion animation is the technique used to make physical objects appear to move. Instead of making hundreds and thousands of drawings depicting movement, an object is photographed, moved a tiny bit, photographed again.  The process is repeated until you have hundreds (or thousands!) of frames.

The Stopmotion Explosion Complete Animation Kit is perfect for the beginning animator because it includes everything you need to get started:

The book begins with a fascinating chapter on "How Movies Work" which details the beginning of animation. With 17 chapters total readers will learn the process of animation from choosing animation actors, creating stories, and building sets.  There are chapters on cameras, lighting, and composition. It even includes information on sound, files and formats, and video editing.


The camera is a 720p  HD web camera. It has a manual focus, a 4 ft cord, and a clip for securing the camera. It also has a built in microphone and can be used with other programs that use a web camera such as Skype.


This contains instructions for both Windows and OS X.  The Quick Start Guide contains an introduction to topics that are covered more in depth in the book. The guide is to get started quickly.


This is a treasure cove of goodies! In addition to the SME application to use with the camera, there is a Sound Effect Collection folder and the Audacity application. You'll also find a template you can use for creating storyboards and some sample movies.


Both Tailorbear and Turtlegirl were very excited to get started. They jumped in right away skimming the Quick Start Guide and set up the camera and the SME application. Tailorbear learns best by doing so she started experimenting immediately to see how it works. She choose to animate a small bottle first. "Mom this is so cool!  Watch the Oregano Oil walk across the desk!"


Tailorbear is using this as part of a 1/2 credit course on Film Animation. She is taking what she learns from the Stopmotion Explosion book and combing it with 2D Manga.  Her long term project is to create an anime using Manga style drawings and stop motion technology.  Think animated paper dolls.

Tailorbear and Turtlegirl worked together to create an animated short using stuffed animals. They came up with a basic plot, chose actors and created a set of sorts. I like how the tail wags in this video:


They created another short inspired by the one above.  With this one they added text to the video using the recommended Windows Movie Maker application. This application can also be used to add a musical score but we've chosen not to add music to our public videos because of copyright and licensing issues. This is also addressed in the Sound chapter of the book.

We're still learning and experimenting with the basics such as lighting and focusing the camera.  Tailorbear is creating some backdops for us.  I'm not really sure who has enjoyed this most: mom or the kids.  Yes, even I have tried my hand at animating things.  I rather like my Pizza Roll Dance attempt but my Sea Monsters at the Beach is rather a flop.

Supergirl did not want to be left out of the fun so she and I created this animation. Turtlegirl helped us with some finishing touches!

I really appreciate how simple this made stop motion. Before Stopmotion Explosion, I thought that stop motion animation was incredibly, impossibly complex, and that I would never be able to do it at home. I loved being able to animate my bear reading a book, or swiping at other stuffed animals. I also loved learning how frames and frame rates worked via experimenting with the included animation program.


I think this is a wonderful kit for a beginner. It is listed for ages 13+ but I think if mom or dad or an older sibling is available in case assistance is needed, children as young as 8 could easily start animating their toys. Do click on the banner below to read more reviews of Stopmotion Explosion!