- December 14, 2017
Have you heard of Heirloom Audio Productions? If you are a regular reader of my blog you may recognize the vendor name.  My family first encountered these fabulous audio dramas when we reviewed In Freedom's Cause.  I also reviewed Beric the Briton on my blog. We've also enjoyed several titles such as In the Reign of Terror and The Cat of Bubastes.  This time we received Captain Bayley's Heir.

Confession time!  As much as I have loved Beric the Briton and Cat of Bubastes from Heirloom Audio Productions I wasn't too sure about Captain Bayley's Heir.  You see it is set in the Wild West of America and I'm not terribly fond of that time period.  Mostly because of all those old Western movies my dad would watch. But I was pleasantly surprised to find myself not only enjoying this new title but shocked when I discovered that it has become my favorite one! Here is a short summary of the story from Supergirl:

The story is about Captan Bayley's Heir.  The story talks about how Mrs. Hall found a baby and took care of it as their own.  The baby's mom died.  Frank is Captain Bayley's nephew and he is at school. He might get expelled for stealing the 10 lb note.  He didn't do it.  His cousin is Fred and Fred was helping him. Fred gave him money to go to America.  Frank wants to be like his Uncle.

Frank goes to America He met some people.  They were friends with him and they sang a song called Amazing Grace. His sweet uncle found him.  He has at the hospital. He was hurt.  Alice didn't believe he was guilty she said "he didn't do it."

Uncle Harold was my favorite because he was crying over his daughter who died.


I love this title the most because it is a tale of grace and forgiveness.  We even learn a little bit about the history of the hymn Amazing Grace.  Supergirl loved hearing the references to the song and hearing it song and played.  She said "you sang that to me."   When my girls were babies, I sang Amazing Grace as a bedtime lullaby.   It is a protestant hymn but still one of my very very favorites.  God pours out His grace on us wretched sinners.

The theme is established in the very beginning when Mr. George sets up the story.  A young American named Frank is chatting with Mr. George.  He tells Mr. George that he isn't much for religion.  He doesn't think he'd ever be good enough for God.  I've thought that!  I've felt that!  When I didn't understand the relationship of faith and works (read the book of James!) and thought if I have to do all these things to earn God's favor I'll never be good enough. I might as well give up!  But Mr. George responds with: "It's not about what you can do for God.  It's about what He's done for you."

There are two plot lines in this adventure woven together and connected by Captain Bayley.  Supergirl shared more about Frank but referenced the other with her comment about Uncle Harold and his daughter dying.  Both story lines exhibit grace: both giving and receiving.

The audio alone is well worth listening to but Crew Members were also given access to the Live the Adventure Club which is a treasure trove of wonderful ways to dig deeper with each of their titles.

One of the best extras available is the Study Guide.  It is available as a PDF download or you can view the PDF online.  Some parts of the Study Guide are available as Questions and an online Quiz.  If you are part of the Live the Adventure Club you can access the Heirloom Audio story and answer questions or take the online quiz.  You can even follow along with an online script.

Back to the Study Guide.  This 38 page document starts off with a short biography of G. A. Henty.  The bulk of the study guide are the two types of questions and the vocabulary section title Defining Words.

The questions and vocabulary are arranged by CD Track.  This very helpful if you need to go back to the CD to re-listen to answer the question.

One type of question, Listening Well are comprehension questions such as "What request does Harry have?" or "What does Frank do with the money?"

The other questions are Thinking Further and may require some research or ask the student to draw conclusions. Some examples are "Harry has grown up in poverty. He is severely handicapped. How can he demonstrate such happiness and joy?" or "What were “dime store novels”? How influential were they in shaping eastern America’s ideas about the Wild West?"

Sprinkled through the pages of questions are sections called Expand Your Learning.  Some topics include Manifest Destiny, Gold Mining Camps, and Victorian Money. 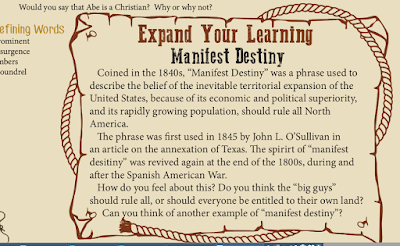 The Study Guide also includes a one page list of additional resources and three one page Bible Studies: God's Grace, Becoming a Christian, and Honoring Your Parents.  All three of these topics are themes woven into the story.

Whether you choose to add Captain Bayley's Heir as a supplement in your home school, or just want to have a wonderful audio drama for entertainment, this is an excellent production with a beautiful message of love, forgiveness, and God's Grace!