- March 28, 2018
A couple of days ago I shared about how Supergirl and I are using Carole P. Roman's Cultural Series as the spine for our geography studies.  Today I want to introduce you to another Carole P. Roman series:  Captain No Beard.

Carole P. Roman books and collections include the Cultural If You Were Me and Lived in . . . series, the Historical If You Were Me and Lived in . .  . series, Chapter books, Bedtime Stories, and of course Captain No Beard.  There are currently 10 volumes in this delightful series about a boy and his imagination. We do not own them all and we did not read them in order except that we did start with volume 1. I am going to introduce you to four of these treasures today.


The first volume is simply titled Captain No Beard but has a subtitle of An Imaginary Tale of a Pirates Life. In this book we are introduced to Captain No Beard, his cousin First Mate Hallie, Mongo the Monkey, Linus the lion and Fribbet the Frog.  We learn that Captain No Beard lives on an island and with his crew they sail the mighty frigate the Flying Dragon. A name he chose because it sounded scary.  We learn a bit of pirate talk and sailing terms such as "shiver me timbers" and "swab the decks."  The pirates are looking for treasure, run into a storm and encounter a mermaid.

Supergirl said her favorite part was when mom called out "You'll have to clean all this up before dinner," and then joined the fun by presenting them with a treasure of cookies.


"Did I hear you say you were looking for treasure?" She lowered a plate filled with golden cookies. "I come bearing doubloons. Just don't leave any crumbs, me hearties."


Strangers on the High Seas


I think Strangers on the High Seas is Supergirl's favorite.  I let her choose which 4 books to include in the review and she said "you have to do the one with the baby."   This book introduces a new crew member: Cabin Girl Cayla who just happens to be Alexander er um Captain No Beard's baby sister.  You can tell Cayla is new. She makes the mistake of calling Captain No Beard Alexander.  In this conversation we learn that Captain No Beard is in charge of Cayla today and he doesn't like it. But he and the rest of the crew learn that she is just as valuable a crew member as any of them when she says them from the strangers on the Shark Bait.  The book teaches in a gentle but fun way about stranger danger.  It's a great way to talk with young children about what to do if a stranger tries to talk to you and you feel uneasy. 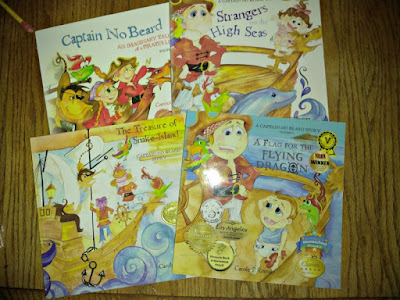 The Treasure of Snake Island


As a literature loving family I think The Treasure of Snake Island could easily be my favorite. A beautiful and colorful sunrise prompts Polly the Parrot to make an observation and from there the crew begins to ask Polly about books.  Captain No Beard pulls a treasure map out of his pocket and they are off to find the x that marks the spot.  They work together to find the x and dig until they find something. When they open the treasure chest they find the greatest of treasure: books!  "That there be the greatest treasure of them all, Captain!"

A Flag for the Flying Dragon


This one caught Supergirl's eye because of the baby on the cover. She noticed right away that this baby looked different from Cabin Girl Cayla.  I noticed that this book which is volume 9 in the series is thicker than the others.

This time the Captain is pondering A Flag for the Flying Dragon. He wants it to be perfect.  A new member has joined the crew and he doesn't have a job.  Each member of the crew has job.  First Mate Hallie swabs the deck.  Cabin Girl Cayla fills holes on the deck. Linus the lion polished a huge lamp and so on except for Zachary.  First he tries helping Mongo the Monkey and one by one tries to help each crew member but with disastrous results.  Finally Captain No Beard finds an important job for Zachary and he has a flag for the Flying Dragon.  Peace is restored to the crew.  "It was probably the most beautiful flag in the world. It united his crew."


My favorite is the Strangers on the High Seas.  Captain No Beard was worried about his sister falling off. She said she would be careful but called him Alexander and Captain No Beard had told her to call him Captain No Beard. It's my favorite because I like the baby sister.  I like that Captain No Beard became Alexander again and the ship became his room and he called his mom the Admiral and asked her to report to the poop deck for a diaper change for the baby.
My next favorite is A Flag for the Flying Dragon because Cayla is in it and she is a big girl now and she has two cousins now on the crew.  Zachary joins the crew. He is a baby and his big sister is First Mate Hallie. They need to find something to do with Zachary.
I love the books and I love cuddling with my mom when she reads them. 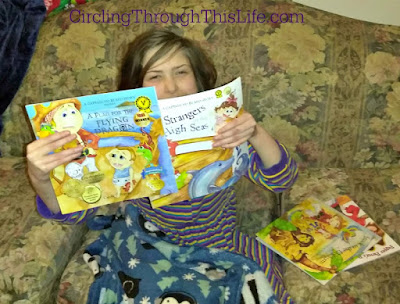 
I love these books. They are fun to read aloud and they remind me how important imaginative play is to children's development.  Play is work.  Even in these stories we see that children test out and explore real concepts in the safe place of their imagination.

I love that at the end of each book the Flying Dragon transforms back into Alexander's bedroom.   I love how mom is the mermaid in one book and the Admiral in another.

The concept makes me feel warm inside as I remember my own children and their imaginative play.  I've enjoyed snuggling with Supergirl and hearing her giggle as I say "arrrgh" or "shiver me timbers" and she fills in the rest of the sentence when I say "being a captain is . . . " she immediately responds "hard work." She loves that we have been taking time to snuggle on the couch to read and enjoy fun, not school related, books.  They've become part of our bedtime routine.

I recommend these books. If you don't have children in the 3-8 years old range you'll want these books available to read when babysitting or for grandchildren or nieces and nephews.

The Homeschool Review Crew reviewed different combinations of books from the different collections.  Be sure to visit them to read about more Carole P. Roman books!